Oh what the heck

I took my daughter for some firearms training from a licensed NRA instructor. Later we looked for arrow heads. After reading the article in Wired I realized all email and texts are being saved as well webpages and blogs, and since I sent this photo to my wife and texted her about the whole thing I guess having a photo on the Lazy Farmer ain't gonna matter. 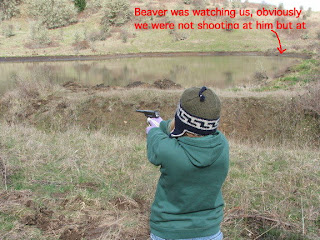 The caption is supposed to note that we were shooting at the dirt bank. I think the infamous beaver is swimming just to the right of the black dot in the photo. You can see a faint "v" in the water. Kind of funny I think. (probably wrong but it makes a good story, kept thinking of the gopher in "Caddy Shack."
Posted by buddeshepherd at 10:00 AM