Last week a memory picture popped up and I was planting the same field on the same day as I had planted several years ago. Pretty neat to see what you did last year. But then the ten years ago picture pops up and I am just depressed. 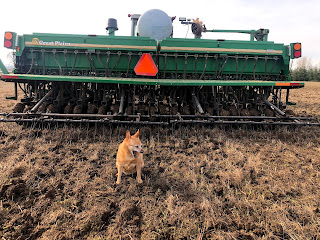 I have been no-till planting. It took in an inordinate amount of time to get ready.

Eight years ago Uncle Harold would not order me Pioneer quick couplers with the built in valve to bleed off pressure so you can unhook under load. He said $175 was too much money. So I rebuilt my old ones. 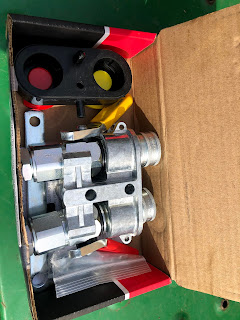 They failed just as I wanted to go to work. I bought new ones for $350.

I no-tilled Radish Monday. Radish is used as a cover crop in the Midwest. The radish roots displace packed soil and add organic matter. I also planted clover as a companion crop. Red clover seems to do well with Radish. After the radish is combined for seed the clover should last two more years.

My friend who is currently obsessed with honey bees says the bees don't do well with Red clover as the bloom is too deep and their proboscis  doesn't reach the nectar. I did not know this.

The radish is planted at 7lbs per acre on 15 inch spacing. The seeds are bigger than clover. Similar in size to Millet but round.  My wife built me little dividers for the drill as I have to block off every other row. This is a continual battle. How do I block off rows but still get the seed to flow evenly? I have made cardboard dividers and duct taped to the drill box. The duct tape is a pain to remove. 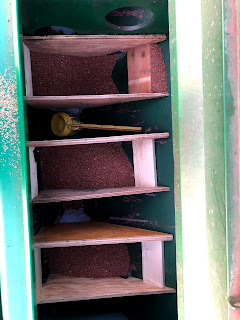 I got started Monday after work. I had problems setting the drill. The seed rate was too low. This usually means there something wrong in the drive and the shaft is skipping. I found nothing wrong.

The next problem was low power to the fertilizer rate controller. Then a hydraulic hose failed.

I requested the next day off of work.

Tuesday was a beautiful day. I ran a new wire direct from the battery to the fertilizer controller. I found my  Seed-Meter and set the drill properly. 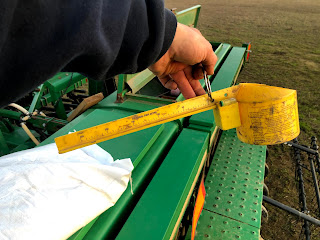 I had my wife's dog Goldie with me. She wants to be a farm dog so badly. She is a rat terrier and loves to chase rats, mice, and squirrels. She also loves to ride in the tractor.

Unfortunately she decided to lay between the drill openers and the rear mounted harrow. I had let her run loose as I was getting in and out of the cab a lot. But, when I was working on computer issues and was stopped but did not get out of the cab she apparently made her ill fated choice.

I soon realized she was missing. I checked the brush along the river. I drove around and called her. I first suspected a Billy Coyote. He is a rascal. Finally I drove the two miles back to the house. Goldie was on the porch covered in mud and shaking. I found a pretty bad scratch on your tummy. I cleaned it and put Hemp Tonic on it.

She seemed fine. A little sore but she is a little dog who ran 2 miles. But, when my wife got home. Goldie could hardly move. The scratch was dirty and she wouldn't let us near it.

So, I took her to the vet the next morning. It was an hour wait. The vet thought she looked like she was in a lot of pain and wanted to keep her on antibiotics and pain meds. I pointed out that she had in fact, ran two miles home in panic. The vet thought that explained the symptoms and sent her home. No stitches. All is well... 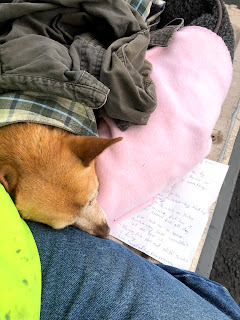 And now I have exceeded my allowed blogging time and my wife says we are going to church! Have a nice day. I was going to complain anyway...

Posted by buddeshepherd at 10:16 AM 4 comments:

I miss Sunday afternoons with my daughter. She is away at college. My wife went to meet in her town. I think they are going to GoodWill bulk bins or something. The daughter and I have differences of opinions nowadays.

They also can't put Dr. Seuss in cultural context which has driven the price of the best Dr. Seuss book, "I saw it on Mulberry Street" though the roof. 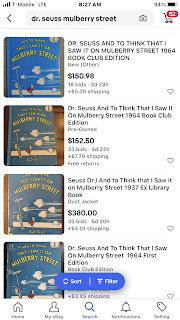 I have nothing to say. Think I will go make hemp buds into pellets that no one will buy anyway... 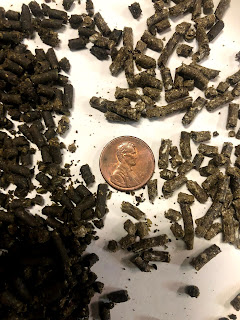 Hemp chicken crumbles! The right side of the photo is barley, peas, clover, and a little hemp. Left side is hemp bud and top leaves. Pretty sticky and "dank," probably could put it in a pipe. Pellet mill heat might even boost the THC. Perhaps I should pack a blunt...