I pass my test, build things, get sick

Monday I took my Turf herbicide license test so I can get a commerical pesticide applicators license. I passed with an 87% which is pretty good considering I was convinced of failure. Strangely enough, it was not my lack of mathematical skills that was the problem. I did find on the math. However, there were a lot of trick questions (in my opinion) and I forgot to study one section.
I was about the have a great week at work. 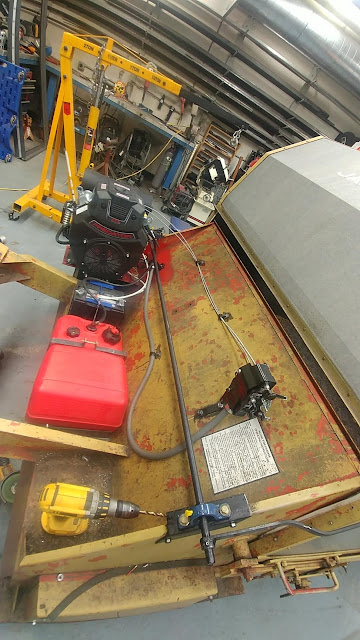 The shop guy wanted me to work on the leaf pickup machine. We put a different engine on it. Replaced a 40 year old Clinton (I think) that kept breaking the starter with a Harbor Freight Predator.
Controls had to be moved and changed.
This beats the heck out of blowing leaves in the cold and rain.
However...
Tuesday I started feeling a bit off. My wife has decided to do some painting and caulking. Monday night we used a rather stinky product which is not labeled for indoor use, then the dog barked every two hours and I could sleep.
So I didn't think much about feeling like crap Tuesday morning. But around midmorning I realized something was wrong.
I had trouble thinking, my brain started attempting to crawl out of my right eyesocket. This is even more uncomfortable when you are running a grinder and the stereo in the shop is blaring hard rock with the occasional speed metal thrown in for torture.
Fortunately my supervisor was gone and the Shop Guy sent me on a 20 mile parts run.
I started noticing that I was having trouble driving straight. Also, I was a little dizzy. I figured it was a bit of an inner ear infection and if you are going to crash you might as well make it worthwhile so I just went faster.
I got the wrong parts... Well, one of the parts was wrong. However, I was kind of wiped out and I went and watered plants in the greenhouse. It was warm and quiet there.
Then I got a text from my missing supervisor to put out rat traps for him. I think that is a mark of responsiblity. I tried to do a good job.
When 4:20 p.m. arrived I headed for the office and I was out the door before 4:30. But then I remembered I had promised my daughter to pick up some artistic stuff for her mother for Christmas. So I went downtown and bought a really cool Japanese made pen that is like a paintbrush and you can do lettering or calligraphy. Not that she does calligraphy but it had really cool Japanese writing on the pen. Then I spied a basement tea shop which I'd never seen before and the owner looked like Yoda so I bought my daughter some tea.
Then I went home and crashed on the couch.
I think I was able to expose a large number of people in several different social setting to plague and disease in the week before Christmas.
The family was taking my daughter's foreign exchange student friend to Seattle and would be gone for three days. They stocked me up with wood for the fire and gave me lots of Ritz crackers and they bailed the next day.
Interesting illness.
As I noted earlier I have once again popped a rib out of place. I usually ignore this until my wife forces me to go to the Chiropractor.
So I had a severe headache, deep coughing, I found blood in my snot but (not being delicate) the stuff that came out of my lungs, the stuff that was up in my head. I could not stay warm, (but it is cold and damp out), every muscle connected with coughing hurts. I have no appetite but am not nauseous. I'm tired but can't sleep, my right ear starts hurting from time to time.
I thought I was well this morning till I got out of bed and had to cough. It hurt so bad I just went back to bed. As of this moment I figure I am mostly well but I'm still cold and have no energy.
It was a strange illness and I don't wish it on anyone else.
I have not finished my Christmas shopping and I really don't feel like it.

Posted by buddeshepherd at 3:08 PM 6 comments:

Muddy Valley back in the day... 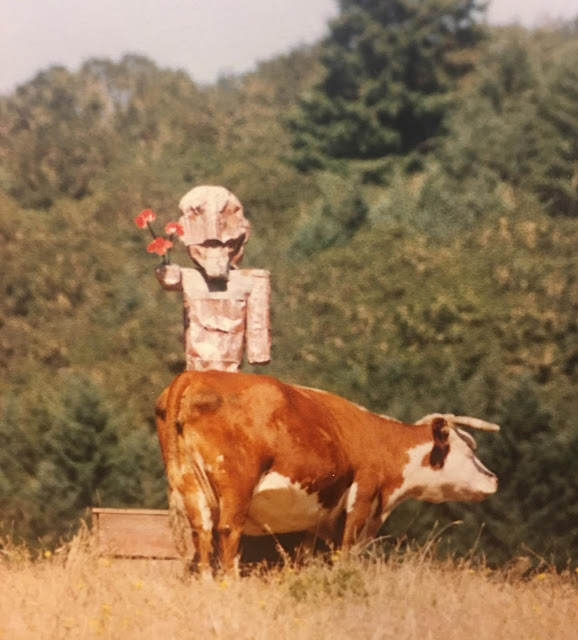 The GRE test is my excuse for not going to grad school. Stupid reason, I'd probably still not have a real job anyway.
I fell off the forklift yesterday trying to change the yard light. Took Teddy and I all day. Ended up installing a new fixture. I wanted to go LED but didn't have $150. Got the cheapo $75 mercury vapor one.
Tomorrow I take my commercial applicator exam. I'm going to fail it. I can't concentrate.
I think I am mental.
Daughter is sick. Skipped church and I'm hoping hot water jets on my back will make me feel better. Not sure what to do about my knee.
Am trying my favorite brand of muscle relaxant.
We shall see... 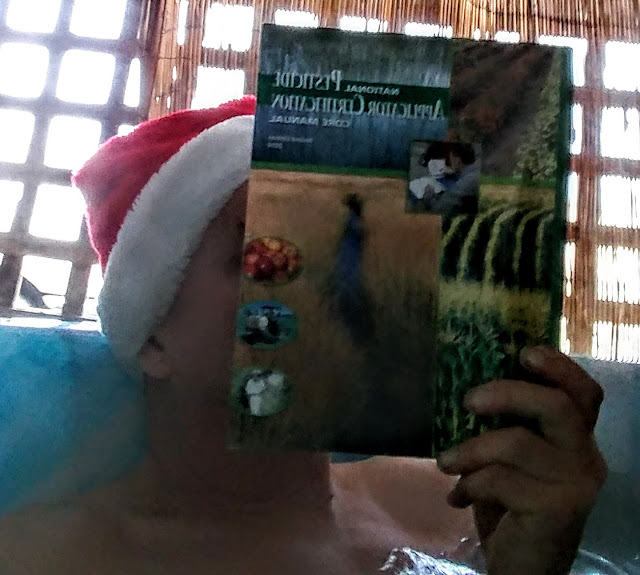 Posted by buddeshepherd at 12:04 PM 2 comments:

Meanwhile in California... I can see if he was going to eat it...