Things I do when it rains

I am setting in my easy chair. My wife raided the scrap barrels and set up a booth at a local flea market. She actually got money out of old springs and broken sprockets that were IN THE SCRAP barrel. It never ceases to amaze me what middle aged women will spend money on.

I am not complaining...

In other news, I am making pellets. I am not sure why. I rarely end up selling the pellets. However, they do take up less space than bags of screenings.

The bags were 1200lbs each. One looked like wild rice but I think it was just broken grass straw. It was full of little black seeds, barley, wheat/triticale, and smells suspiciously of Dog Fennel. The other bag was barley screenings, tops, straw, and hulls. It reeked of mouse piss.

Running the screenings though the pellet mill did not make a real good pellet but it got rid of the mouse piss smell and the fennel smell. The pellets crumbled pretty badly. I think I needed some sort of oil seed or molasses added. However, I combined two bags into one. It took about four hours so I suspect I lost money.

I did learn about hydraulics so perhaps it was useful.

I found a flow divider so I could run two hydraulic motors off the one remote on my White 2-60.  I didn't quite understand that flow divider on a hydraulic pump with 12 gallon a minute actually splits into two outlets which then have six gallons a minute. That is not a lot of flow for the hydraulic motors.

The auger was supposed to feed the mill and the conveyer cools the outgoing pellets but the auger didn't have enough power to turn when full of material. So I swapped the conveyer which worked. Then I used the auger to cool the pellets. It tends to break up the pellets badly. I need another conveyer I suppose. Or more power for the auger.

Posted by buddeshepherd at 1:12 PM 4 comments:

I updated something and now I can't comment on blogs

I am a little frustrated with Blogger. I have no idea what I did but I can't comment as Budd E. Shepherd on anyone's blog. I get a message with browser is configured wrong.

Google suggested I change my email id due to a problem with mail.com. Now my email is buddeshepherd52@gmail.com.  Which also doesn't seem to work.

Perhaps it will fix itself with the next update. 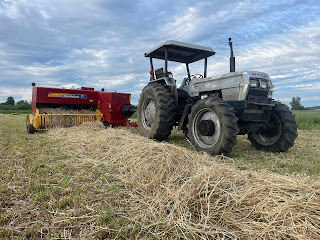 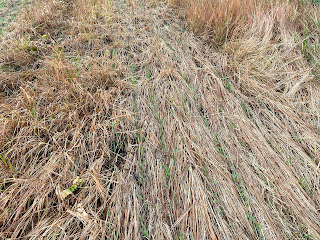 When no-till actually works it is a beautiful thing! Barley into annual ryegrass.
Posted by buddeshepherd at 9:45 AM 2 comments: