I have a new assistant. She is a history major. She likes to discuss the War of Northern aggression.
She can argue about theology, (can actually quote scripture), politics, guns, philosophy, and she is learning to back a trailer.
It is amazing to encounter a young college student who is interested about everything.
Sometimes she gets a little carried away with her driving.
It could be that I am a bad example...
She did get a little close to the beaver pond. I was actually impressed at how far she got off the trail with the Gator. 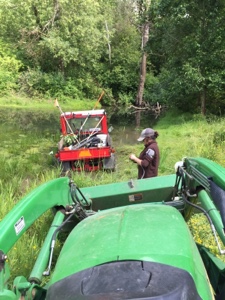 In other news...
I left the Ford Ranger in the middle of 350 acres. Someone stole the wheels off of it. We have let some young people go fishing at our farm. A friend of a friend is a tweeker. 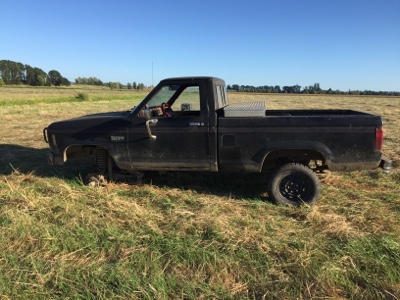 I called the Sheriff. There is really nothing you can do about it. No serial numbers on aluminum rims and half worn out tires.
Speaking of half worn out tires... What sort of a moron steals worn out tires and aluminum Ford Ranger rims? You risk getting shot and go to all the work of exchanging wheels at 4 a.m. over something you could get for next to nothing from your local scrapper?
We got the license number of the vehicle leaving our farm. Just thought it was one of the kids fishing.

On the other hand...
My faith in humanity was restored yesterday.
I was moving the Tedder down highway 99W and my hat blew off. I of course slammed on the brakes because I didn't want to lose my hat. My bald spot would burn.
A passenger in one of the cars that I backed up, (a long line) jumped out, grabbed my hat, and brought it to me.
I said, "thank you very much."

My nephew from Portland came to visit. He got to experience farming. I sprayed molassas on the rained on hay. He helped. I rigged up a sprayer on the bumper of my pickup and we followed the windrows around the field.
I suspect he thinks farming is boring and full of strange misadventures.
He seems to be somewhat saddened by the violation of my Ranger. I suspect he respects my ability to not get stuck with bald tires.
Posted by buddeshepherd at 9:17 AM 10 comments:

I have an 80 percent higher risk

Of dying from prostate cancer because I eat two eggs a day.
MuddyValley harshed my mellow yesterday by telling me eggs increased my risk of prostate cancer.
I was going to suggest that it depended on which end you inserted the eggs but desisted.
One of the work study students asked me yesterday if carrying that heavy load ever got me down, that heavy load I carry because I'm so full of shit.
I had it coming. She had been gushing about the magic of water. This brought on several comments from other students groundskeepers.
Like, you got the wrong plate of brownies sister, and then someone brought up fluoride and someone else pointed out that fluoride makes you gay and much hilarity followed.
But I digress...
Popular nutritional research that increase your risk of colon and/or prostate cancer.
I found one person that disagrees.
http://perfecthealthdiet.com/2013/11/healthfulness-eggs/
Posted by buddeshepherd at 12:25 PM 7 comments: 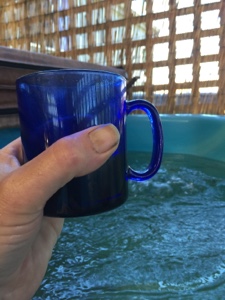 Note: I checked the sleep catigory on the Fitbit and I got ten hours of sleep. This is up from my weekly average of six and because of that I got a smiley face. That really motivates me to sleep more. I like smiley faces!!!
Note: it is really quite peaceful here. I can hear the bells from the distant monestary which seem quite cheerful. No doubt soon to be replaced by the caterwauling of an Imam if the ruling elite get their way...
Posted by buddeshepherd at 11:48 AM 7 comments:

I think it is going to rain.
I'm not especially well prepared for rain.
Most people don't think it will rain.
Here are my reasons:
Flocked sky two days ago. The Flocked Sky appeared while there were showers but it is always a good indicator of future rain. The sky looks "funny" in the evenings. "Funny Sky" is an official meteorological term which means i don't know what is going on but it looks like rain.
The Portland Rose festival is coming up and always rains during the Rose Festival.
In past weather patterns, overly hot weather in the spring is followed by rain.
And finally, we have hay down and I have promised to stack bales for other people and I don't have time to do it.
No one else thinks it will rain. People are cutting hay like there is no tomorrow... 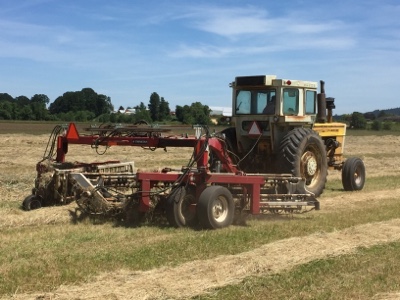 Lulu helped me yesterday. I even fixed her air conditioning. She wore out fairly quickly however.
I had to load a truck of straw.
It was not a good day.
The truck arrived late.
It was supposed to get to the barn around 10 a.m.
The truck driver called me at 1 p.m. and said he was an hour away. I was getting the rake going. Then I decided to eat my lunch and right a the moment I got my leftover Uncle Jack's BBQ ribs on my plate the farmer called and said my truck was at his barn.
I ate my lunch anyway.

The blocks of straw would not say together. The squeeze clamps at the bottom of the stack. The bales squished so much that I had to add extra bales so that the squeeze could clamp tight. I didn't figure this out right away...

The truck driver looked as if he was going to have heat stroke. However he still wanted to talk. I couldn't hear him anyway. He talks softly.
I got it loaded by 7 p.m., the Trucker was not amused.
Oh well... life is full of pain and suffering.
I returned home and the hydraulic clutch was not working on the stacker. It took me a while to bleed the air out of the line as the bleeder screw was plugged.
I stacked until 11 p.m., should have gone longer.
Neighbor called at 8 a.m. to see if I could stack for him. I don't think he wants to do it after Church as he will have to run his loader tractor in 102 degree heat. I hope my a/c holds out.
I want to go kayaking with my daughter...

In other news...
My new work-study student wants to know why people are voting for Trump. It was an interesting discussion as I don't like Trump either.

This is why people are voting for Trump, everyone is fed up with the people who are protesting Trump. Click on my links and tell me how you feel about the opposition! (Note: it is the Daily Mail)
Headline says Black Muslim but he looks a little pink to me...

Posted by buddeshepherd at 9:38 AM 11 comments: