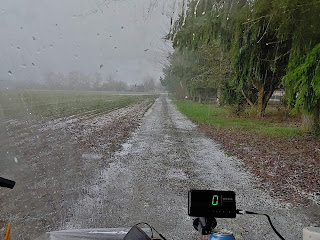 Today we had sleet and tomorrow it may be 50 degrees.
It is because we use lots of fossil fuels and we can fix it by a redistribution of wealth.
Also, I started working on air-conditioning systems and I've had a couple catastrophic failures....
Posted by buddeshepherd at 6:36 PM 4 comments:

My College is going broke

Posted by buddeshepherd at 10:21 PM 5 comments:

I get my college bill and understand why small non ivy league private colleges are going broke.

For those of you who are just randomly stopping by I shall explain. I am a farmer who decided to become a groundskeeper at a small liberal arts college so my daughter could get free college tuition.
I did this partly because it looked like she was going to be a writer and I was probably the bad influence.
Student loans suck the life out of you and a liberal arts education is not always useful.
Fortunately she decided to become a nurse and the college I work at has a great nursing program.
The fiscally sensible thing for her to do would be to live at home and commute the 7.5 minutes it takes to get to school.
Speaking of fiscally sensible things, I decided to take advantage of my free tuition benefit and take an accounting course.
I hate accounting. I hate balance sheets, asset to debt ratios, debits, accounts payable, and my mind goes numb hearing about them. In fact I'm kind of drifting off right now.
But some day I am going to have to actually do it.
I can't take the class for credit because I already have a degree.
That is idiotic. They say it is a tax issue, I say it is BS.
More creative accounting.
It brings to mind why I hate accounting.
Small colleges usually give tuition discounts to make up for the pathetic pay scale. When times are good they see it as a great benefit. But when times are bad and they want to cook the books the decide it is a expense and want to cut it to make it appear they are saving money. It only puts off the inevitable as potential employees realize they can just get a real job and save for college with the difference in pay...
So I got my bill today. Over $5,000 for a four credit accounting class. The nice lady at the counter even said it with a straight face.
I think I clicked on the take it for credit box on the online application to see if I could get away with it.
Now I'm back down to an audit. There were a few phone calls and a trip to the registrars office.
Let's add this up... $5,000 for a 200 level intro to accounting class and $235 for class a stack of photocopies and a time limited access code for a website text book. Sounds like one heck of an advertisement for community college for me.
Actually, that is my plan. I'm taking the "free" class so I actually know enough terms to take the financial accounting for farmers from the community college. Because that is the one I can actually use.
yeah, I'm going to do a few debt asset ratios to find investment opportunities for my private investing account. Yup, that's me... Donald Trump, today junior groundskeeper, tomorrow... Well probably tomorrow I'lll be cold and wet and annoyed and trying to do my accounting flash cards in the rain...
Self improvement is a lot of BS...
Posted by buddeshepherd at 10:26 PM 4 comments:

I take a college course, tear down a barn, get snow

I spent my Sunday afternoon applying ice melting liquid at work. It was not what I had in mind.
My list today was, Attending Church (canceled due to snow), Doing my homework, (can't concentrate), Making pig feed (spread ice melt instead), Going to visit MuddyValley and getting a lecture about Donald Trump. (spread ice melt. May give him a call this evening...)
It was a bit of a frustrating afternoon. We have missed every single weather event this year with our ice melting but no one seems to notice. I drive my Kawasaki Mule about and make trails and then it rains and washes away. 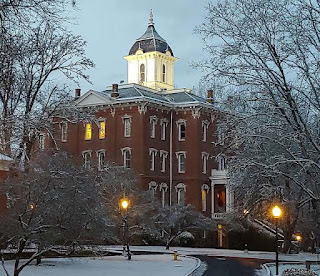 I got a call in yesterday to cut up a downed tree. I really didn't see much point in cutting it up on the weekend. It missed the girl's car and security put lots of caution tape around it. Thing is... It already fell down. It ain't gonna stand it's self back up, take better aim, and topple again...
I took my daughter in with me so she could study using the free internet at the campus Starbucks. I went in to help her get the wifi set up. The nice lady gave us free drinks as she knew I was on a weekend call-in.
My supervisor showed up to help cut up the tree. It was nice to have help but I'm pretty sure I'm not supposed to drive my daughter around spreading ice melt. I will find out Monday.
Soon it started snowing. Security showed up because security is bored.
My supervisor left to go send emails.
I cut up the tree and cleaned up the mess in the snow. The security guy got tired of standing around and watching and grabbed a rake and helped me.
It really starts snowing. My supervisor went home.
Me, being thoroughly institutionalized at this point, retrieved my daughter, and signed out of work. Then I called my supervisor to see if I would get a call back to apply the ice melt during the snow event.
Nope... It was so slick I could cut cookies in the parking lot with my Mule. And I did so. Security seemed to find this amusing. I guess I'm a real employee now...
When I got home I helped my nephews finish replacing a post in the barn. They did most of the work. I did my best to confuse them. It was cold.
Today started with freezing temperatures. My friend the boiler guy at work texted me pictures of frozen wheel tracks.
I got my call-in at noon. It was above freezing and temperatures are climbing. We will have rain tonight. Starbucks was closed until 4 p.m.
The daughter seemed to be content riding with her dad for four hours. We listened to odd playlists on Spotify. We got coffee when Starbucks opened. We had to pay. It was a student that helped us.
We drove home in a mini snow storm. The wind is blowing like crazy. I think it is going to turn warm overnight.
Last weekend we tore down the old barn. It was supposed to go down 20 years ago but we never got around to it.
We hooked two tractors, one to pull in the direction it needed to fall and the other to keep it from hitting the hay shed. I cut the wood off the side to help it fall. 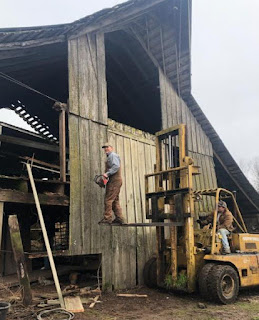 I don't think there will be much good wood to salvage. Should have taken it down five years ago to save the wood.
In other news I have taken advantage of my free college benefits to take a class in accounting. I hate accounting. I can't concentrate. I don't have time.
I went to the college bookstore to buy the book. They gave me a packet of papers and a little box that contained a code. The cost was $235.
You get a code that is good for six months that gets you into the WileyPlus website where you can read the book and do the exercises.
This was my first accounting lesson. When you have a captive market you can charge what you want. I found the access code online for $97.
The packet of papers was prepared by the instructor. Previously he used the school photocopier to make the packets and they were free. He got in trouble. He gave us binders for the packets in class.
I may post more about this later.
Or I may not...
I need to win the lottery...

Posted by buddeshepherd at 7:54 PM 5 comments: