Instead of writing my own post and then linking to him. So read this and then comeback and look at what I have to say. Or not, whatever...
Of course you do have to take whatever I say with a grain of salt, er about five lbs of salt. I'm setting around as I am setting around eating doughnuts, drinking coffee, and listening to Mel Torme instead of working. Yes you did read that correctly, Mel Torme... It is a long story... 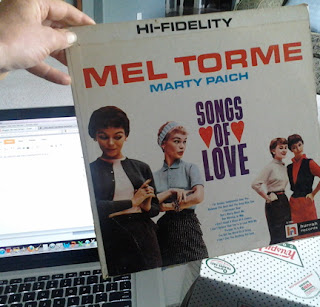 But, I digress...
And now I will say with a perfectly straight face, Facebook is not cool. It is pretty much yesterday. I have no idea exactly what is hip at the present time but I can tell you that anything populated by middle-aged women detailing their every movement is no longer The Cat's Meow. (Nothing personal to you if you happen to fit that profile, you are the exception and your Facebook posts are really insightful and interesting! And I was not accusing Gorgesgrouse of being a middle-aged woman!)
I am on Facebook but I find it very annoying and never post. Of the five or six people I wanted to find when I signed up, I found two.
It is handy in many ways and is probably a useful social media tool. I like to cruise people's profiles looking for embarrassing photos and people revealing personal information that I find amusing but that is typical behavior for someone who sits in his easy chair and is now listening to Burt Bacharach.
You know I do have more to say about Facebook but I just realized that I am insulting a number of people who read this blog and I really don't have that many readers to insult so I think I will go back to sorting another box of records to send to GoodWill.  Anyone like Andy Williams or perhaps need a couple or five big band sing-along albums!
Do I keep albums for the cover even if I never intend to listen to them?
Anyone like Ed Ames?
Anyone want a Numark graphic equalizer? It has glowing lights!
I think I will post on Facebook now!
Posted by buddeshepherd at 12:49 PM