You don't Judge me! Modern thought in a nutshell... 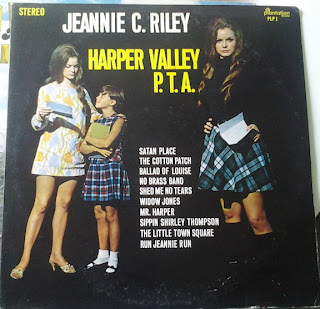 I finally got into some good stuff in the last box of country albums. Some George Jones, Jimmy Rodgers, and The Harper Valley P.T.A album by Jeannie C. Riley.
I actually sat down and listened to the title song.
The lady gets in trouble for trolling. Wearing dresses a little short, hanging out in singles bars, and so she is deemed unacceptable to work with children.
Well she comes back with a list of the PTA board's hypocritical actions in sort of a modern interpretation of "let he who is without sin throw the first stone."
However, it comes off in popular culture as 1. You don't judge me... 2. If you are a hypocrite then I can be (fill in the blank with favorite sin) 3. Everyone has a secret sin.
Basically the lesson learned was that other people's sin justifies my own, rather than "we all need God's love and forgiveness," which means we should be kind and supportive and uphold our traditional cultural values of morality and honesty so our kids won't degenerate into little animals screwing and flinging poop at the walls. Oh, wait... that's a description of the 21st century!
I am perhaps a little sensitive as I got into an argument with someone who told me that when she had unfairly labeled a few years ago she became that label.
I asked why? Why would you become what you had been so offended by being falsely accused of? I really didn't get a response.
Sometimes there is no real answer other than, "I was stupid."
Perhaps it would be a good idea to go have a "slut walk," and show solidarity with the poor lady the PTA  victimized! I do love a good slut walk-from the sidelines of course....which kind of puts the joke on the slut walkers, hey... angry or not, we love the half-nekked ladies! Like we listen to them anyway... pretty funny!
One day it is going to result in one of those lectures that my daughter will look at me with amazement and exclaim, "Where did that come from?"
Posted by buddeshepherd at 6:53 AM