How did I ever live without a forklift?
Forklifts are pretty cool!
I attempted to put the boy's 4wheeler in the Walnut tree but it started to slip. They sure came out of the house in a hurry.
I was also able to move lots of really heavy objects.

I now have two forklifts that work. The fellow I bought the small forklift from has been working on it. He was quite concerned that it was not working properly.  They came out and worked on it quite a bit on Sunday. I watched them for a while. The engine seemed to be out of time.
Yesterday morning I checked the timing by taking out the number one cylinder plug and putting my finger over the hole. Then I cranked the engine. When it blew my finger off the hole I checked the number one spark plug wire at the distributor. It was 180 degrees off. I twisted the distributor to line up the rotor and the cap and put it all back together.
It fired right off and ran very well.
I was going to call the fellow and tell him I got it started but then I got busy and forgot.
Later I saw him working on it.
He asked me if I got it started. I just told him it started up when I got the battery charged. I didn't see the point in telling him it was 180 degrees off after he had worked so hard on it. 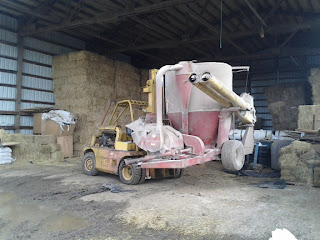 I came home and my helper came to work, had coffee time, and went home. He texted me for a suggestion of jobs to do. I replied that he could 1. Put the hoses on the sprayer, 2. Get the silage chopper in the barn and check it out, 3. Work on a forklift, Or just go home... He went home.
He didn't tell me he was not done spreading fertilizer.
It is kind of funny.

Saturday I found this gopher snake in the field when I was planting. He was really angry. He hissed and rattled his tale like a rattlesnake. I looked around for an apple but didn't see any. Later I discovered I was naked but I don't think it was the snakes fault. 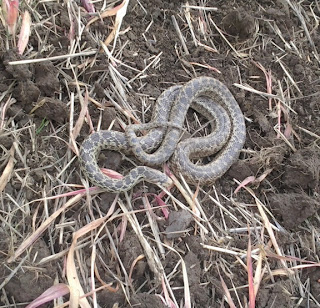 Now if only I had an excavator.
Or perhaps I would compromise by finding a Dragline or one of those really old steamshovel (you have to read that link!)  type excavators with cables and clutches. That would be more my style.
Posted by buddeshepherd at 7:08 AM