This is what I did today. After scaring a hundred geese out of our wheat fields which they have mowed down like a lawn. Well, not my lawn as the lawnmower is broken I have not repaired it yet.
The powershift/hydrashift/amplitorque or whatever you call the on the go shifter on a White tractor failed on our 2-135. It failed in a mud hole while spreading fertilizer and the tractor came to a complete stop.
However, after the transmission cooled down it would move in over and direct. In underdrive it does not move. The oil is black and smells like fried clutch disks.
You have to remove the engine to get to the over/under which is a separate unit from the main transmission.
To remove the engine you remove the standard stuff, sheet metal, wires, fuel lines, and you remove the radiator and that big brushed aluminum mystery metal grill thing in the front. The oil cooler and a/c condenser fold forward. You have to remove the a/c pump but not the hoses. It hangs off the side. We sat it on the hay bale we were using to stand on.
To remove the fuel tank you block it up, remove the hoses, take the air intake off the air cleaner, unbolt and rotate the metal elbow straight up out of the way. Then you unbolt the supporting straps and unhook the fuel sending unit.
Then you remove the front tank support, pull the blocks from under the tank and tilt the front of the tank down as far as you can. That way you can tilt the back of the tank up to get it past the cab and lift the tank up tilting it to clear the air cleaner housing. It is a bit tricky which why I'm writing it down. I forget from time to time.
The next tricky step is removing the engine and over/under without getting the short PTO shaft jammed up. It will either stick in the flywheel hub or the hub on the transmission side. If you know were it is going to stick you can either remove the engine and over/under as one unit or you separate the two at the clutch bell housing and pull the engine by itself.
The book shows how to make a clever little set screw plug thing that inserts into a hole in the over/under and clamps the PTO shaft. It doesn't work so after you make it you might as well just chuck it as far as you can throw it. 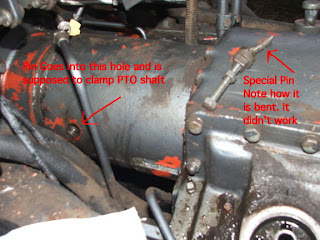 In theory you can use a bar to slide the ending ahead and then lift it straight out of the frame. However, that didn't work. We made a spreader bar to keep the chains from collapsing the valve covers and built it so you could adjust the center point. Then we hooked it to the loader tractor so when we lifted it pulled the engine forward. This worked pretty good but... 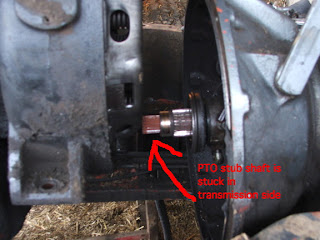 You then have to figure out if the PTO shaft is stuck in the clutch hub or in the transmission. This a very critical step as if you do it wrong things get very jammed up. I'm not really sure how to tell you to figure it out. I turned the fan and it seemed like too many things were turning. There is a coupler between the over/under and the transmission. I think you can slide it back far enough to get your fingers in to feel the PTO shaft but I couldn't. We took the weight off the engine and over/under as one unit but it just didn't want to slide far enough ahead.
So I slid it back and we unbolted the bell housing. The engine sprang free and we lifted it out. 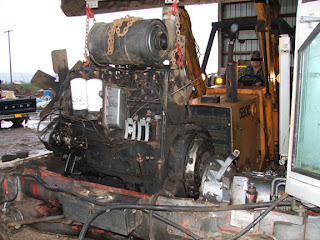 Here is a photo of the offending PTO shaft. I was having a hard time getting the shaft loose from the transmission hub but I found that by turning the tractor wheels and backing up just a touch the over/under just slid off the shaft. Don't do this if you are not rebuilding the over/under as it can ruin the seals in the middle of the hollow shaft in the over/under which result in many puddles of oil and much frustration. What you should do is block up the over/under and make sure it is not in any kind of a bind and then you should be able to pull the shaft out by hand. 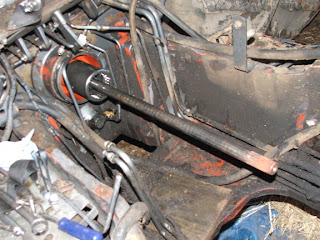 Make sure you have plenty of blocks to hold up the engine as it will otherwise crush the pan when you set it down. Also, make sure to block off the turbo intake. And, that is one heavy engine... 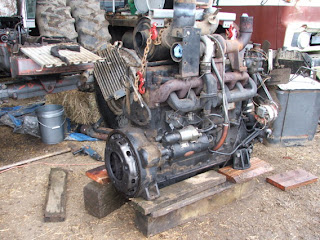 Having the proper sound system also helps. We hooked up the Sony portable reel to reel and listen to a little "mood" music.  I must say that several farmers who stopped by to observe were somewhat nonplussed by the sonic stylings of Boots Randolf and Matt Monro. Later we progressed to The Georgia Satellites, Joan Jett, and The Cars. Then the dogs knocked the speakers over... 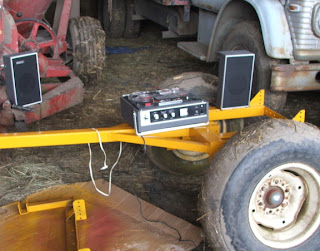 Pictured below is Stanley, the dog who nearly made the music die. Not even dogs like "Leaving on a Jet Plane," set to strings. I think it was an act of desperation. 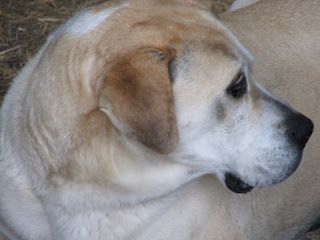 Posted by buddeshepherd at 10:26 PM