He wanted to know if he could hold his Friday hamburger BBQ in the back of my dead IH truck as it is now lakefront property. That was really funny...
The river is now up for the third or fourth time this year and our freshly planted Oats are drifting to Portland.
It is all bad karma/payback for the mean trick I played on my daughter. The other day.
I had been using spray foam to plug up holes in my grain bin and thought one of them looked remarkably like a turd.
I put it in her slipper.
She was not amused... 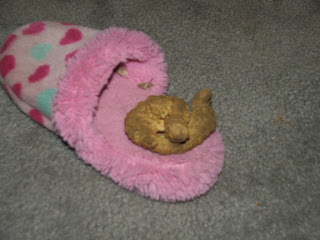 We discussed this yesterday whilst sitting on the porch enjoying ice cream cones. She told me I was the best daddy she ever had. But then we got on the subject of mean pranks to which she had been subjected.
-Like when I put a fake hand up my sleeve and then when she shook my hand and it came off saying, "oh no, you broke it." (She cried) I actually feel bad about that one.
-Telling her everything was in black in white when I was a kid and that our town got color after everyone else due to it being out in the country. And that my mom would buy color paint on sale not caring that it was a strange color because we didn't have color in our town and then one day we got color and it turned out the bathroom was hot pink with an Avocado  green door. She repeated that story-as a joke I am sure. But it got me quite the phone call from my sister-in-law.
-Making her listen to the Ledgendary Stardust Cowboy
-Breaking wind and then blaming it on her
-Or pushing her off her chair in order to win super Mario Brothers on the Wii.
There were a few more items but you get the general idea.
She still maintained I am in fact the best father she has since she only has one father, but then down graded my status relative to other fathers, pointing out that I had to be the most annoying father she knew of.
It is good to know your are number one in something...
Posted by buddeshepherd at 8:20 AM