Surrealism on the farm-Sometimes I just wonder what I am doing and why....

When you are an anonymous blogger or comment on NAT you can be anyone you want. I am sure many of you reading this assume I am a very successful farmer who just pretends to be modest, but really farms 5,000 acres. That is not the case.
The sun was out today. I felt pretty good. I sold some chicken feed yesterday. I started cleaning up some stuff, I made some more feed, and then I went to pay my grain bill. The fellow talked to me just like I was a real farmer. We discussed me renting a farm I have found. He told me he would pay me a decent price for oats. I left feeling optimistic but a little strange.
Our other subject was that my neighbor pointed out a few people (I was surprised as he never speaks ill of anyone) who needed the Lord. (I was also surprised as he never talks God stuff) It is one thing when I'm depressed but when Mr. Positive is depressed it starts to make me a little nervous. As I thought about that strange conversation my optimism started to fade a little.
Then I arrived at the farm.
The Uncle is buying a computer to run QuickBooks as the other Uncle is retiring as a book keeper. My dad forgot how get his iBook to print again. It turned out he had somehow clicked the wrong box and he really doesn't read the dialogue boxes that pop up telling him what to do. It was not so difficult.
Later, I was installing a switch on my antique engine powered fertilizer box that I bought to store feed. There was a lot of mud. Everything is old. If my brother was here he could set up my Uncle's books. I can't do math or accounting and I'm a terrible businessman. My brother is of course not here. He is in Indiana for Christmas.  I have completely forgotten all the accounting things he told me to do while he is gone.
My cousin's daughter was here and was talking about my employee (who is her cousin but not mine) and how he takes advantage of me. I pointed out that I was aware of that and I found it all kind of pathetic. Yet I did not have the heart to fire him because he is such a nice guy.
Then I broke the switch I was trying to install. It was a cheap POS (different from NOS) which was made-yes you guessed it- in China. 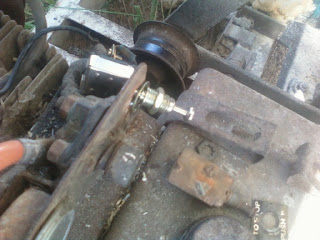 I looked around.... I thought about the farm I just left. I thought about our farm. I was not sure if I should cry or drink or beat my head against the grain tank. I couldn't just go have coffee break as it was after 3 p.m. 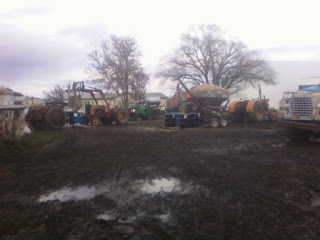 My other neighbor, who is a real farmer, had an employee quit. I think he would hire me. My wife says I am working here to "preserve a way of life."


This is my father hard at work! 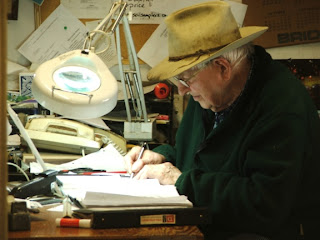 By that point it was dark. I was talking to my other neighbor from whom I rent a whopping 4.5 acres and a not very good shed, which his uncle insists on filling up with junk cars. My friend (neighbor) was discussing the Studebaker car that he was going to work on for me four years ago and now is setting in pieces under his car port.Then dad decided it was supper time. He was coming to our house for supper. I heard the squeak of his walker tires as he speed-walked through the lake to my house. He likes to come to our house for supper and watch old movies.
After supper we watched, "Its a wonderful life." I liked Mr. Stewart's wife. She was so pretty and nice. Dad said he had never seen it before. He laughed at all the right points and said "oh my!" a couple times. He actually has seen the movie before when my brother spent a previous Christmas in Indiana and Dad came over and watched movies after supper. When you are 92 and forget things frequently it is not so bad. You can enjoy the same thing multiple times! 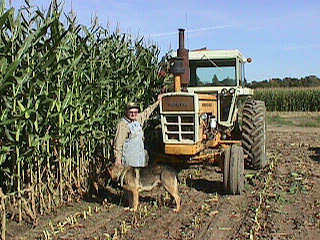 This is my father ten years ago when we had better corn. That is Buddy the 110lb German Shepherd standing there with him. Dad is not as short as the dog is big!