My father and his mental state.

My father is almost 93. He goes to work every morning at 7:30 am. He walks out to his office and fires up his iBook and goes to work selling moisture testers. (Hay, wood, soil and so on)
As my father ages, thinking processes become muddled. He gets terms confused so you end up arguing about something with him, and then you realize he simply is using the wrong word for what he wants to say. You don't want to put him down or get him upset because the problem gets much worse.
Of course he is quite stubborn.
I usually say what I want and then leave him to figure it out. This is one thing when dealing with Filemaker pro because then he sits there staring at the screen for a half hour and then asks me again. By this time he may be more ready to listen to me.
Currently my brother is gone. My brother is the details person here. He takes care of the insurance info for dad. Dad does not believe he is insured by the company he is insured by. Dad is frequently right about things he is trying to remember-but then is often wrong. There is a 75 percent chance he is just using the wrong term but actually knows what he is talking about. But, it is the 25% that really causes the problems.
Of course he will not listen to me, which is ok. I suggested he call either my brother or the insurance agent. He will not do either.
A good example is when he is staring at a dialogue box on the screen of the computer and he calls me and asks me what to do. I suggest he read the dialogue box and do what it says. Somehow this does not work with his thinking and he just can't do it.
Yesterday he called me quite upset. The printer would not print just one record out of his AppleWorks database. After an hour of work I discovered all his printer presets had been changed to, "print all records," even the preset labeled "print current record." I do not have a clue to fix it. It will not save my changes to the presets. I tried throwing the preferences away. I think I will actually have to reinstall AppleWorks! We have an airport network with a wireless printer. The printmonitor sends the file to the printer and it is stored in the printer memory. Deleting the file from the printer is a little difficult. I told him to just pull the plug... 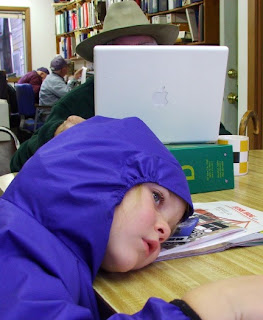 Dad at the coffee table with his iBook from last year. (Note the bored granddaughter)
Last night at supper he told us the lemon juice we had in the refrigerator at his hour for him to drink tasted funny. I asked him if he was out of the orange juice I had made him. He said he was and that the lemonade we had for him tasted funny and he wasn't sure if he was supposed to drink it. I went over and checked his refrigerator. He was not quite out of orange juice but he had been drinking lemon juice concentrate. He decided he was out of orange juice with half a class left in the pitcher.
It is really kind of interesting to see which thought processes don't work. I wonder what circuit has shorted out in his brain? I've seen this with other older folks. It mostly sad, kind of frustrating, but also kind of fascinating. I'm just mostly thankful that he is in this good a shape for almost 93 years of age!
Here is a A photo from ten years ago 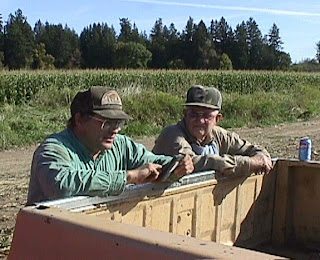 Dad and brother doing some figuring.
Note: Having your brain go foggy is pretty frustrating. He knows it is happening to him and that is part of what gets him so upset, and then he can't think at all.
Posted by buddeshepherd at 8:43 AM