We have had a nice Christmas. It was pretty low key. The daughter was unable to sleep and woke us up at something like six am. We opened our presents and then took Dad out for breakfast.  I got a book called, "Somewhere in Oregon," which is a collection of interesting short stories about small towns and interesting people and I got a small R/C helicopter which I promptly flew into the drapes and ruined it.
The daughter made a haul on Lego's, a crane and an aeroplane and a giant telescope. 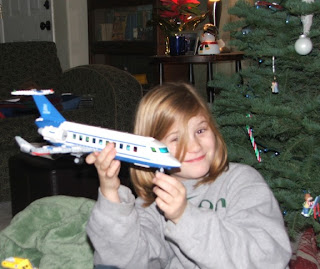 We have been using it to attempt to spy on the neighbor as the sky is so cloudy. We found an interesting knot hole in the old walnut tree, but not squirrels. 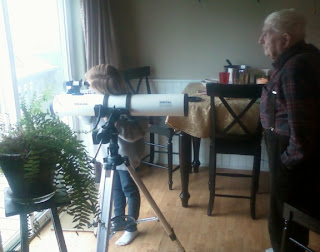 Dad went back to work after breakfast. He is going through the local phone books and has made a list of everyone connected with the lumber and building businesses. He has a flyer of moisture testers for wood and is sending it to everyone. We got him to take a break for lunch. He decided to stick around and watch a movie.

The nice lady who I mentioned in a previous post came out after oats for her horses. She bought her son and boyfriend who are a bit younger than I. I kind of think I may have gone to High School with her but perhaps not. I was a bit worried she would catch a chill as there was a light drizzle and the temperature as dropped a few points. No threat of snow, just your cold clammy Oregon winter.

We are watching "To catch a thief," with Grace Kelly. You know I may be just a bit slow but I am not sure they are really talking about diamonds. The innuendo is kind of jumping out at me. The fireworks at just the right time. Oh my!!!

It is a little better now that we have the action. A chase sequence on the roof! We are on the edge of our collective seats! My daughter has not seen the movie and so this is a great surprise.  Dad has forgotten that he has seen the movie and so it is also a great surprise.
I think the burglar is the cute one and they should run off to South America together but I guess I'm just contrary...
Posted by buddeshepherd at 4:41 PM