I accomplised a couple things today

I started the G706 and moved it outside only to discover that the generator does not work... 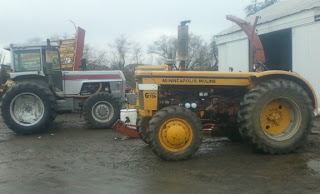 I ground a couple ton of chicken feed. And sold 5 barrels of it. Actually I traded five barrels of chicken feed for 10 empty barrels which i am going to fill and sell on craigslist. I am a bit disappointed with this batch as it ground up too fine. I actually bought what I thought were broken wheat kernels but the bin was half full of oats and oak leaves and I had to run it all through the hammer mill.
I mixed some camolina seed and molasses with it. camolina is supposed to be high in Omega 3 and so the eggs should be good for you. However the mix is 1/3 wheat 1/3 oats and the other 1/3 is peas, clover screenings, camolina seed, sweepings of corn cobs left over from last year, sprouted camolina and weed seed, and whole oats. In other words, what ever I find. My goal is 16 percent protein. 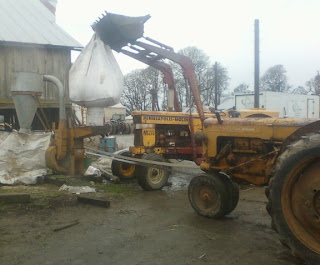 Here you can see my really high quality feed grinding set up. 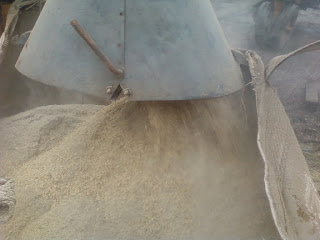 For some strange reason the few customers I have absolutely swear by the feed. They are doing free range chickens and they say that my feed makes the birds gain faster, produce more eggs, and there is almost no waste. I don't see how this could be with a combo of whole oats and really finely ground up material. However, I am not complaining.
The second thing I have noticed is that Hispanic customers pay cash, seem very happy, and are more friendly. However, I can't tell what they are saying to me so who knows. I think if I spoke Spanish I could make a lot more money selling hay and feed.

In an unrelated subject. I watched Fast Times at Ridgemont High tonight. I had never seen it before. This is the only movie I have ever seen where Sean Penn was a believable actor. I was surprised that the characters had some actual depth to them. I liked Mr. Hand. He was not treated as a total villain or a one sided hardliner jerk. Rather he seemed to actually care about the students. The sort of teacher you respect, perhaps fear a little, get mad at often, but forces you to learn something-often against your will, but you do know that the teacher cares.
I thought it would be a pretty stupid movie but I was pleasantly surprised. I would not let my daughter see it for another 15 years.
Posted by buddeshepherd at 9:40 PM