Today I spread slug bait. The Pacific Northwest has been invaded by a multitude of the slimy little creatures from all over the world. Many of them have moved to our farm.
I have been waiting for the rain to let up so I can spread slug bait for a month now. I usually apply it when I plant so that the slugs eat the bait before the plant sprouts. However, we worked a lot of ground instead of no-tilling and I was hoping to avoid the slug problem. A lot of the wheat I spread slug bait on today has almost big enough to out grow the slug pressures. The annual doesn't look like it has a bag slug problem but I thought I'd just throw away $500 so I spread bait on everything that was short and I could find slugs.
Ironically our other major pest seems to be doing a very good job at eating the slugs. Geese are flocking to the fields where the worst slug problems were. However, they also eat the wheat and sometimes the annual ryegrass.

I have two photos. The first is of the slug baiting machine parked in a wheat field that is totally overrun with annual ryegrass. The annual ryegrass fields that I planted are not this thick. It has been scheduled for spraying for a while and they claim they can control the annual. I doubt it. 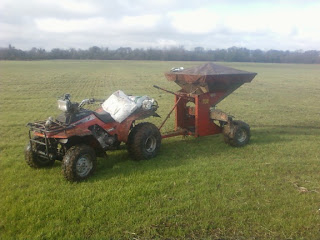 The next photo is of wheat that I no-tilled into a sweet corn field. It is pretty much bare dirt. I planted it at an angle and if you look the right direction you can see rows. I spread slugbait as there were slugs but there were also many goose turds so it is probably a lost cause. 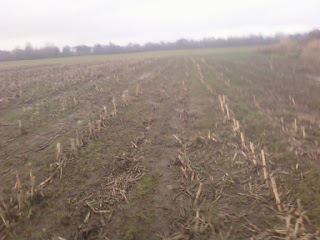 Then I managed to hit a mud puddle at a high rate of speed which drenched me with very cold water so I went home for lunch. After lunch I needed two more $95 bags of slug bait and to get the kids from school so I also went to see an older gentleman who just had a relapse of cancer. Two weeks ago he was walking around fine and today he is in a hospital bed in his home waiting to die. Very depressing. He invented a really cool hay tedder that lifts and gently fluffs the hay instead of throwing it around. His family is all gathering. I never know what to say.
I think I'd rather get hit by a bus and get it all over with at once.
Posted by buddeshepherd at 10:15 PM