I've been thinking about showing some movies. Click here for a view of last February, the start of movies on the great white barn across the street.
I have a couple new titles. "Colon Semi-Colon," is not a do it yourself proctology examination film. Rather, it is about punctuation. I think everyone should be more punctual, so it may be interesting.
I also have, "I'll only Charge you for the Parts," which is a consumer consciousness film from the 1970's. I need this one as I've been having issues with my pickup repair project. I didn't get a lot of new cartoons as I have not sold any of my old films on Ebay and I'm broke. 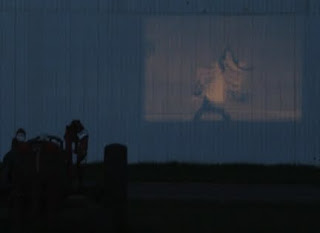 And I have the headline feature-that we never get around to watching, "Revenge of the Pagans!" It is a Sword and Sandal epic, although I did not find it listed at IMD. I probably bought some 16 mm porn by mistake. That will stop traffic...
It is a bit chilly and I did not get my projection booth built. The kids will brave the cold if there is hot chocolate, Farmer Alfalfa, and Woody Woodpecker involved. The adults are not so hardy. It could be that I am really the only person interested.
The cold/damp weather is hard on the films also. I wanted to build a projection booth but I donated the plywood to the Sadie playhouse project. Unfortunately it is in the back yard, not the front, so I can't use it.
I should explain for those who have not read the story of the great white barn and the 16mm projector. The neighbor built a hay shed across the road from our house. He built it out of surplus white painted tin and it is huge. If we put a movie projector in our front yard (which is the machinery lot of an old farm machinery dealership) we can project the movie across the road onto the side of the barn. I find it quite fun. Other folks like the idea of watching the movie better than the actual act. Most of the time I don't care as two people make up an audience. One person is just being weird...
Today we went to pickup the recently repainted hood for my tractor. On the way I got a call from Crazy Mark who is working on my pickup truck. He discovered that the bushings are worn out on the distributor. So there goes another $150 and I'm betting that was what made the truck run bad to begin with. Since my helper and I were in town anyway we went to help him put the engine in. Mark smokes a lot! He is not looking very well. He has two large German shepherds in his shop. One was in a crate and went nuts anytime we went near her. I like Mark. I hope he is not dying.
Mark does not have a lot of patience. The engine did not go in very well. You would think a pickup truck manufacturer could make the engine compartment big enough to install an engine easily. Then the transmission fell off the jack. There was a lot of swearing. Mark said we needed to take a break. We went home.
When we got home we discovered that the newly painted hood had worked it way under the toolbox and had rubbed the new paint off. Sometimes I figure if I didn't have bad luck I would have no luck at well.
I do have eggs. The fellow who is buying feed from me lost his contract to supply several hundred cartons of farm fresh and sort of organics to his health food store. He needs more feed. He has lots of eggs. He brought me six dozen the other day. Tomorrow I'm getting another six dozen. The nice lady at Ashe's Cafe in Amity said she would trade me lunches for eggs so I won't have to live on custard. Mark said he would not trade labor for eggs.
The gas station will not trade gas for eggs but the coffee lady might trade for coffee.
My helper no longer thinks it is funny when I sing, "I am the egg man/I am the Walrus," says he doesn't like the Beatles. 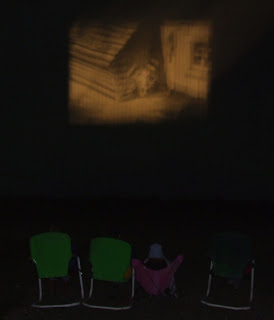 Posted by buddeshepherd at 10:05 PM