We go to the beach for a holiday!

Sunday Sadie and I went to the beach. Mrs. Shepherd stayed home as she had stuff to do. Sadie and I stopped at GoodWill where I scored a  Leupold Sportsman Compass for $7.99. In the original box with a note from the fellow's son saying it was a birthday gift and the deliniation or deflection or whatever, was set at 20 degrees for use in Oregon. It is the good kind where it flips open and you can sight on something or put it on a map. I can't figure out how to use it. Mark Trail I am not...
So, we hit the first beach we came to and didn't leave for four or was it five hours. It was beautiful. Sadie made friends with the boy next to us. His name was Andrew. He was drawn to us by the siren song of vintage Tonka toys and monster trucks.
Here are some photos. 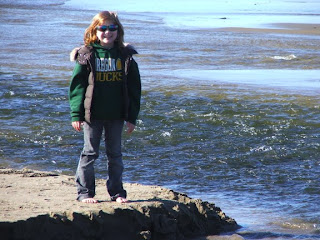 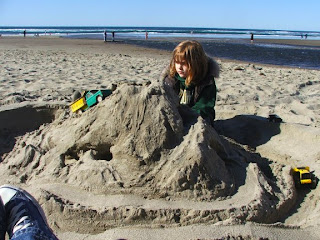 There was a young hippie couple sleeping on the beach. They woke up around 3 p.m. and did some smooching. Every time they moved the reek of patchouli oil floated in the brisk sea air. The girl was beautiful and probably in her 20's. She had the usual tattoo's of flowers and vines. She had sunglasses in the shape of hearts. Her face and hand that was not covered by the blanket were burned beet red. She seemed quite happy. The guy was your usually scruffy modern hippy. He looked sort of like Bob Dylan with a goatee. After they awoke he picked her nose for her. It was quite sweet. 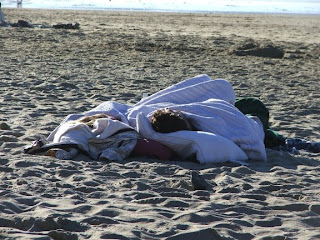