This is Stanley. Stanley is half Great Dane and Half Australian Shepherd. He weighs 105lbs. He is a very friendly dog.
He is not brave. 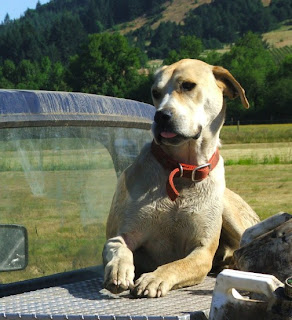 Tonight the Dogs were going nuts. There was much barking and going on. One would have thought the place was being invaded. I went outside. There was an incredible frog chorus. The peepers were peeping like mad.
I did not see a burglar, perhaps it was a cat burglar. That would explain the dog consternation.
I walked around the house. The dogs were at the other house, still barking.
Stanley spied movement at our house. With a ferocious woof he charged across the machinery lot. I hid behind a shrub. When he was with in a few feet I jumped from behind the bush and said, "Woof! Grrrr! Woof! Woof!" Quite loudly.
Stanley gave a startled "yip!" and turned tail for the other house as fast as he could run.
I nearly fell over I was laughing so hard.
He stopped and came back. He seemed pretty happy to see it was me and not some ferocious stray dog with a really bad doggie accent.
Of course he is just about always happy.
He is a simple dog...
Posted by buddeshepherd at 10:32 PM