A week with someone enthusiastic!

My new helper has a notebook. He writes down things we need to do. I have a big notebook which has sort of the master list. He kind of follows me around and takes notes. This is important. I get started on one project, then I see something else important and mess with that. Then my cell rings and I talk to some other distracted farmer, then I come back and start on something else, then someone comes to visit and I talk for half an hour. Sometimes this gets me a job, but mostly I get confused and can't remember what I am doing. Josh looks up in the notebook what is next and he won't let me take coffee breaks unless we have accomplished something. I'm not sure who is the boss...
This morning we had to burn some trash. He collected lots of old spray cans. Then we built a fire under the cans and when they were good and hot we shot them with the .22. This was our break. It was a lot of fun. The explosions are bigger after dark, but they were still very nice in broad daylight. Then we started the old loader tractor which was parked down at the river with a dead battery. That took a half hour.
I managed to get my feed grinder going. Josh found me a stainless steel auger from the local CoOP for $250 and they threw in a box with a tarp and engine for free. We got that going yesterday and mixed up an order of feed for a local freerange chicken guy. It worked pretty well. We stuck a short electric auger down in the center of the powerbox to mix up the ground corn with the wheat and oats. It kept jamming up. Then Josh yells, "You drilled through the box." The bottom of the powerbin was a little rotten but it was nothing a rolled up paper towel didn't cure.
That 19 percent corn got really hot. I hope mixing it with dry wheat and oats drys everything down. Otherwise there may be burning bags tonight! 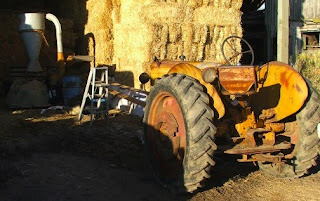 This is the hammer mill set up. It is wedged between stacks of straw in the hay shed. 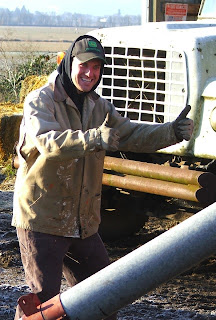 This is Mr. Cheerful and Enthusiastic. My wife won't let me make fun of him as I have done for years. She says it may give him a complex and that I should be nice to people. 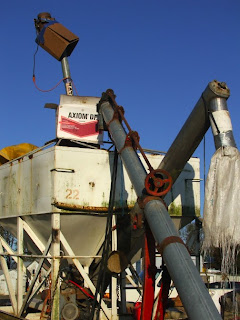 This is my feed mixing set up. I send grain up the main auger into the box. I can circulate the grain with the short auger sticking out of the box. The cardboard box around the auger keeps grain from falling out of the grain box. The box has its own unloading auger. It is powered by an antique Wisconsin single cylinder engine. 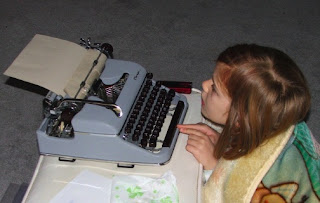 In other news. Sadie is teaching herself how to type. I do not know why. She is writing a letter to her friend. She has been writing a book. She does not want any instructions from her father. She is a mystery to me at times.

I couldn't figure out why the transmission low oil pressure light kept coming on when I ran the hydraulic auger with my 2-155 White. So I changed the filter. It had chunks of metal which look link the remains of shims and small hard junks of plastic in the bottom of the filter. The oil looked like there was water in it. I have no idea. I did use the 2-155 to empty a dump box full of triticale earlier in the week. I think that is where the water came from. I'm a little worried about the other stuff.

Posted by buddeshepherd at 11:39 PM