We had our Christmas Program

Church at an old folks home is an interesting experience.
The turnover rate is at times depressing. The Alzheimer's also takes its toll, along with just a good dose of dementia, strokes, and the general issue of if you are old enough to move to the home you are headed down hill.
Our Christmas program is a voluntary thing. There is only four remaining members of our original church and we are not thespians so there is no pageant. We meet only twice a month, on the second and fourth Sundays. We have our program on the last Sunday we meet before Christmas. I ask people to think of something to share and I find some Christmas poems to read to fill in the blanks.
This year we had several stories and a lady got up and talked about Christmas traditions from her Childhood. Her mother was dutch and was always amazed at the combination of traditions in the USA. In her tradition gifts were given earlier in December and Christmas was a religious holiday.
Sadie read two poems. The boy cousins memorized the Christmas story from Luke, and I got people to cry. I read Han Christian Anderson's, "The Little Match Girl."
That brought forth a whole new round of Christmas songs and stories and we went over-time. Afterwards we passed out brown paper bags with candy and an orange. Then we had our potluck lunch and everyone seemed pretty happy.
I was kind of struck by the thought while I was up in front-this is the last of an era. The last Christian generation. These folks are the end of the traditional era of this country. They have more in common with the Dickens era than with the 21st century.
They sacrificed and worked and saved and sent their kids to college and taught them to believe what they were told. In turn the kids have new values and their kids have little to do with the previous chain of history. I've thought of this before...
I had a discussion with S. about modern science and education. I noted that at one time scientists thought the world was flat and would accept no other idea. I pointed out every one knows that people who believe in God have a built in prejudice-but scientists don't show their prejudice. The thing is both believe they are right. The Christian has their rule system written down so if they get something wrong it is a big deal. Those who worship science just say their original info was incorrect and they just change what they believe. It doesn't make them more right it just makes them appear that way and gives them a way to deny anything they don't believe in.
People want you to believe what they want you to believe so that it gives them power over you. You have to choose what you want to believe in.
This came out of a discussion about faeries and "wee folk."
I said that just because people hadn't seen one in years it didn't mean they never existed. I said that legends were just stories handed down over the years and that most were based in facts at some point. I pointed out the cute four-foot tall waitress at the cafe and suggested that looking back in our memory we could imagine that she was an elf. It would make a much better story.
So, Sadie says, "If you believe in faeries then why don't you say so to other people." I said, "If you admit you believe in stuff like that then people laugh at you and think you are strange so I just keep ideas like that to myself."
Which then led into our discussion of science.
I told her to not believe everything she hears at school. Just because the person has authority and is a teacher doesn't mean they are correct. She needs to listen to those who love her. I noted that our belief in God gives us a set of rules to live by, a heritage of history to look at make future decisions, and a way to explain things we don't understand. Choosing Science as a religion doesn 't really make you less superstitious it just means you won't admit that you are...
I suppose I shouldn't be allowed around children. I don't know why I go off on things like that. I think my kid will grow up kind of bent.
Here are photos of her enjoying the week of freezing temperatures.
We took some time off from work to enjoy the ice. The river hardly ever freezes across. Note the big frozen whirlpool in the river! 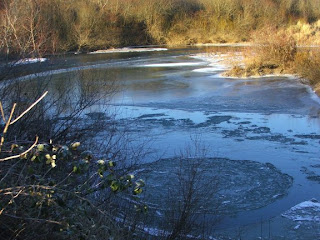 Sadie enjoys a chunk of ice. We were looking at the crystals on the bottom of the ice. Pretty interesting! 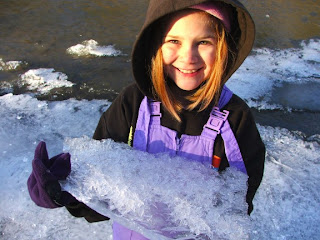 Then we all went sliding on the ice. It was fun. We don't always get a lot done in the winter time here at the farm! 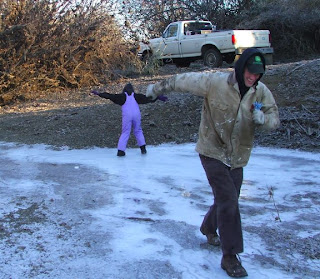 Posted by buddeshepherd at 7:05 AM