The Battle of the Stolen Christmas tree

Sometimes I worry about my daughter...
S. and her mom are going south to Junction City to visit Aunt B. and see a live nativity program at wife's childhood church.
I am getting ready to go after parts for a Christmas Present I'm making for S. and I'm thinking about making a special desert from my childhood. It involves soggy grahmn crackers, vannila pudding, and cherry pie filling.
I did some quick picking up as S. has my Marx Cowboys out of their box. This is a huge deal as they are collector items and 30 years old and a bit fragile.
The cowboys had been on a quest to find the infamous Green Man, a jade statue of mythical powers which had been hidden and a treasure map drawn, and a quest was on.
Upon closer observation it appears that the quest for the Green Man (a plastic game piece which is grotesque) has degenerated into a battle royal. I have photos.
The boy cousins were here for a while. I will have to blame them as I did admonish against the use of violence several times during the course of the evening. 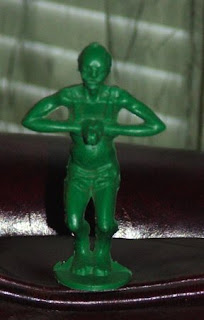 The Green Man is a 3" high plastic game piece. It is possibly the most ugly plastic figure I have ever scene. A lady gave it to sadie at an antique tractor swap meet. It has become the object of the quest. 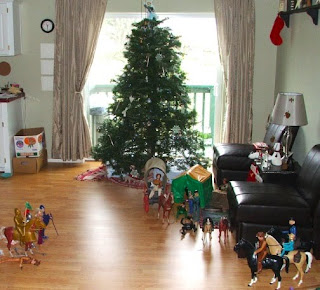 This is the scene of the Great Christmas Battle of the "Borrowed" Christmas tree. We have decided to take it back to the great pile of trees, After Christmas...

Note the layout of forces. It would appear that the wagon and the tent are some sort of home base. There is a machine gun nest with two indians. Possibly Leonard Peltier and Geronimo.

It would appear that flanking maneuvers are underway by a group of knights on one side and a mounted posse made up of a cavalry soldier, a cowgirl, and Johnny West himself.

It would appear that one cowboy is a casualty! 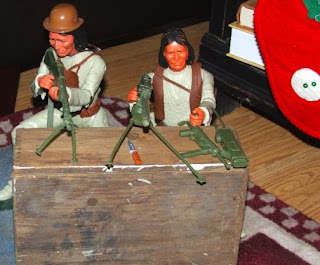 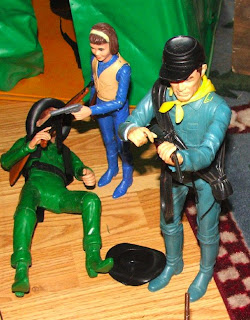 The girl has a 1911 .45 auto and the downed cowboy has a Thompson. Looks like Captain Maddox has his Sharpes out. 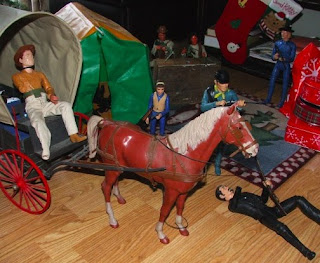 The wagon usually carries all the camping supplies. The wagon driver is my old cowboy who has lost an arm and a leg. There are two men in black who are on the floor and the cowgirl has her .45 auto out. But what is up with the Indians? Is this an AIM last stand? Are they all on the same side? 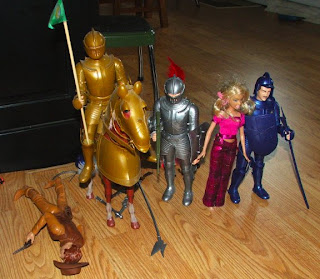 We have this complication. Is the Barbie a hostage? A damsel in distress? Or has she been rescued? Or is this a Patty Hearst sort of  brainwashing by the Knights? The gold knight is carrying the Barbie Standard. But that cowboy has obviously fallen by the sword! 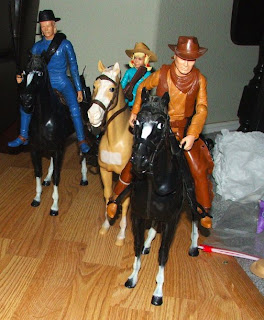 Here is the flanking party. Custer, Janie West, and Johnny West. The cowgirl is Sadie's identity and she is riding Sadie's favorite horse. Nathan was Custer the other night and I don't know who was Johnny West. I am usually JW and he is riding my horse.

This is quite the mystery. Sadie refused to discuss it all this morning.

She got pretty peeved at me when the cousins were here.

There was a serious gun battle going on and I suggested the bad guys may not really be bad as much as misunderstood. Perhaps they just need to know Jesus? What if instead of shooting at them and making fun of their missing limbs you would invite them to the campfire and give them a cup of coffee. We do have three coffee pots and several Johnny West cups. Perhaps by not shooting them in the bottom and instead showing them God's love through kindness they will give their hearts to Jesus and leave their life of crime and desolation and become missionaries to the great unwashed masses.

The response was: DADDY!

Followed by more gunfire and:

There was also a question about Leon Peltier but that ended up being very complicated. It my daughter and her cousins start shouting "Free Leon Peltier!" and waving clenched fists at school I am going to be in soooooo much trouble.

Especially since the boys attend a Mennonite school...

Posted by buddeshepherd at 12:39 PM