A fool and his money... I finish refoaming speaker and I buy an amp-sort of accidently...

I finished the DCM Timeframe 350 speaker which I took apart the other day. See this blog post.
I ordered a kit off of ebay to refoam the speaker and I got the wrong one. They sent me one for the DCM TimeWindow speaker. I has an 8" driver. The TF 350 has a 6" driver.
I just ordered another kit thinking I made a mistake.
I got another TimeWindow kit. I pointed this out to the seller and he immediately shipped me a new kit for the correct size speaker.
The kit comes with a pot of glue, the foam surround, and a CD with a test tone to help align the voice coil. And instructions.
The Timeframe 350 rebuild is pretty simple.
You knock the top plate off the speaker. I is held in by two round metal dowels. Next you gently pull the grill cloth off the top of the speaker. There is a gauze sock and under that another foam impregnated gauze sock. The foam is rotten and make a huge mess. You roll those down from the top to uncover the woofer.
I removed the four screws holding the woofer. The terminals are color coded with a red dot painted on the speaker frame to match up with the positive wire.
Then you carefully pry up the cardboard trim ring around the edge of the speaker. The old foam surround is glue to the speaker frame under this trim ring. You have to scrape off the old foam from the metal frame.
Next you apply glue to the speaker cone and the new surround. You let this set up before you connect the two. It is a little touch to get the surround centered. I let this set up overnight.
The next day I plugged in the Test tone CD. It buzzes so that the voice coil moves in and out about a quarter inch. Glue is applied under the outside edge of the surround and you then press it down onto the speaker from. The buzzing automatically centers the surround. You can push down on it with a pencil eraser to get rid of air bubbles and help it stick. It can then set up for 10 minutes or so and you check it again. I pressed it down some more and then tried the test tone. All was fine.
The instructions say to run a bead of glue around the speaker cone where it joins with the surround. This is tricky. It is hard to run a bead. I cut too big a hole in the spout of the glue bottle and it wanted to come out too fast. I end up smearing it around with my finger so that it didn't puddle.
It looked bad at first but after setting overnight it looked fine. 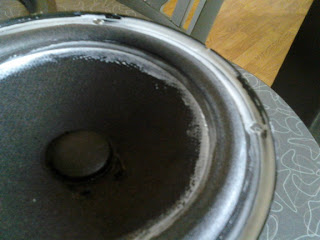 The assembly went fine. I did that last night. I tried it out with some Townes Van Zandt and a little Ezra Brooks. It seemed properly depressing for an election night. I suppose I should have listened to Cat Stevens. Other than I really feel about Cat Stevens the way other people feel about The Ledge.
I have yet to hook the TimeFrames back into the good system.
I tried them on a Dynaco SCA-80 integrated amp which I snipped on ebay. The fellow spelled integrated wrong and something else so it didn't show up right on the search and no one bid on it. Plus there was the $25 shipping that I overlooked. Oops... 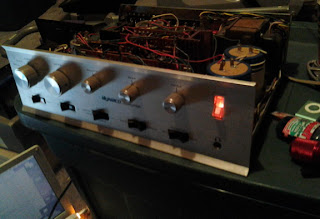 I bought this amp because is the only amp that will fit on the book shelf we are using as an entertainment center. I want to replace the 1 Watt (or whatever) RadioShack SA-155 as it doesn't have enough inputs. Plus, I have a Dynaco AM-FM tuner I acquired somewhere and I thought it would match.
This SCA-80 spent sometime in a "Man Cave," according to the auction. It looks like it actually was a cave as there is some oxidation on the chassis and the wiring and circuit boards have the look that comes from dust and damp.
I read some reviews that said the SCA-80 is a good value as the sound is good and it has a warmer tube-like sound. I found it a bit harsh sounding. However, I was feeding it from my MacBook off of iTunes and I'm not sure what quality I have it set at.
It is quiet for the most part. I had to treat a couple switches with DeOxit fader lube to get sound out of both channels. There is quite a pop when you turn it on or shut it down. Also, the two large resistors on the power supply get very hot. I am not sure it is a good choice for home entertainment system that seems to always get left on.
I wish I really understood electronics as I think you can bet much better sound by upgrading the capacitors and I pretty sure I have read of a way to decrease the power usage and not make it a fire starter somewhere on the internet.

And that is my life...
I'm working on what could be a 350 to 500 acre no-till job. It would be an excellent job which would pay for a new set of tires for the 2-155 but for the 200foot climb in elevation. The fact that I am planting wheat at 140lbs per acre and it is all in 50lb bags and that there is nothing to listen to on the radio. Lars drives me insane. NPR is getting annoying. There is only one playlist for 20 stations on the FM dial. I've spent much of my life driving in circles and it is getting tiresome. The field is wet and the drill plugs up every few rounds. The hill is so steep if I raise the drill at the end to turn I go sliding sideways.
I'm a whiner...
Posted by buddeshepherd at 10:19 PM