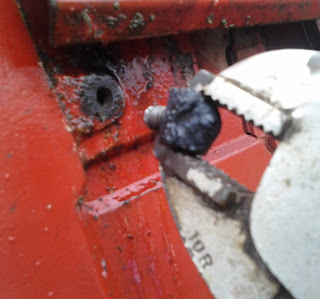 I am not accomplishing much. Have suffered a loss of energy. I tend to go off on irrelevant projects. Like removing this stuck bolt when I can't figure out how to hook up the hydraulics on the loader so it it will work on my 806 International. That is partly because the loader is an utter piece of crap and the tractor is also an utter piece of crap and I can't believe I actually thought I could get it to work.
I do not understand how someone could utterly butcher something like this loader and actually use it. Or why I thought I could get it to work...
So I removed a stuck bolt...
I tried PB blaster, ATF and Acetone (50/50 mix), and I gave up. There was just a nub sticking through the casting and each time I gripped it with the Visegrip it would make that nub smaller.
Speaking of Visegrip pliers. They have been bought by Irwin and production has been moved to China. They are now slightly clunkier and of much cheaper construction. I never really thought of a Vise-Grip as a precision instrument but they certainly have become less so. I am planning on stocking up at garage sales. How could they ruin the Vise-Grip!  (another reason Romney lost-everybody hates corporate America!)
But, I digress...
I found an old square head nut that was slightly larger than the bolt. I centered it over the stub sticking out of the casting and then fired up the welder.
Welded the inside of the nut to the bolt and then waited till it cooled down.
I sprayed liberal amounts of acetone/ATF mixture on the offending bolt.
After it was cool, I clamped my Vice-Grip onto the head of the bolt and it came out easily.
The welder puts the heat directly onto the bolt plus it seems to shrink the bolt as well. It just turned right out.

On a side note: I am getting too much spam so there will be either comment approval or one of those anti-spambot things that I hate.
It is kind of strange, they focus on one post and then when I delete the post they move to another one. I don't quite get the methodology but they are quite persistent.
Posted by buddeshepherd at 8:34 AM