I have been stuck in a tractor cab for three days. Perhaps I should qualify that a little. This three day misadventure has been broken up by rain, digging a nasty combination of clay and dead bent grass out of 24 press wheels, digging same combination from between the v-opener disks, loading 80 50lb bags of wheat in the drill every hour and a half, well in theory, but in reality more like three times a day.  Or has it been four days?
Whatever it has been I have been listening to talk radio and NPR, punctuated by the beeping of the monitor telling me row 24, row 14, or row 11 have plugged, and the occasional foray into the horrible repeating carts is modern FM radio.

What I have learned from NPR election commentary…
1.     The Republican leadership, especially those running the campaign of Mitt Romney, should be made to walk the plank.
2.     They still don’t know what went wrong…
3.     I learned from NPR that Romney was the man for the job due to his expertise in rescuing and/or looting failing companies and that without him we are doomed to economic collapse, or just plain mediocrity.
4.     When it comes right down to it people will not elect a Mormon for president. And that people will lie about this.
5.     The worldview of a modern young person has no understanding of  cause and effect. or profit vs loss, or that the world is full of pain and suffering and that saying “But I really tried,” does not fix failure.

What I have learned from the Mexican kid who was dispatched to bring me pallets of seed and sometimes helped me load the drill.
1.     Mexico is full of drugs and crime and people who will kidnap you. And/or kill your relatives.
2.     Most Hispanics who come here do not want those above mentioned criminals allowed to follow them here.
3.     If you insult Mexicans in general they will all sick together.
4.     This is news to the idiots who run the Republican party.

What I learned yesterday from NPR…
1.     Obama has one plan for the economy. Raise taxes on the rich…
2.     The Republicans have two plans for the economy, Oppose Obama and mess with “entitlements.” Whatever that it means.

What I think.
1.     I’d like to see the financial cliff. Shut the government down I say. No changes will happen until the money runs out…
2.     If more people spent their Saturdays digging sticky mud out of the presswheels on a grain drill and loading grain 50lbs at a time the world would be different.
3.     Oregon is a beautiful place. Even though it was cold and wet and there was rain and sleet I was on top of a 500ft hill and I could look across a landscape of rolling hills to the rows of mountains in the background. Those were defined by deepening shades of gray and fog.
4.      Sliding a 160hp FWA tractor sideways down a hill where the bottom is a ravine full of trees, brush and mud, will wake you up more than a thermos full of coffee…
5.      I need new tires on my tractor, so if anyone wants to donate $6,000 to my paypal account I will say, “thanks!”

What I have learned from writing in Microsoft word and pasting into blogger:

1. The formatting doesn't really come through.
2. I should not wait till the last minute to do my devotion for Church...

I lied, here is a photo of a trip downhill in the rain following my GPS. There is a reason for the camera shake! Note the white knuckles on the steering wheel. 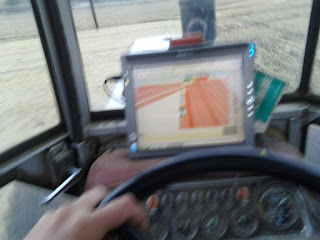 Posted by buddeshepherd at 8:29 AM