Dynaco stereo in the living room, a forklift, and a bale fork, and mud, plus I get an old George Jones album

It is a lazy Sunday afternoon. We were going to meet some friends for an Olive oil tasting. I really have no idea what this would involve. I certainly hope that Popeye or Bluto was not involved. I'm thinking it is sort of an educated thing to do. Perhaps one step above a wine tasting. Probably a lot of short pants and keen sandals, but with more bread. I like bread so it seemed like a good idea. Plus, I like the people we were going to meet there and my daughter says normal people go to visit friends and are not grumpy and never hide when people come to visit them. (not that I ever do that...)
So we shipped the daughter off to church with my brother and family. Alas, the Olive oil tasting did not happen and we are in the midst of a bit of a storm.
The storm started yesterday. I took advantage of acclimate weather Saturday and drove the forklift over to the neighboring dairy to get the hay fork to go with the loader and tractor I acquired a while back. I did this all to pick up a stack that fell over in MuddyValley's barn. So I acquired a crappy loader, a crappy IH 806, and a device to pick up 10 bales which has been setting in a weed pile for the past decade. This will be a highly successful venture I am sure. Nothing like bottom feeding at its finest.
AND why the %^&*( did i decide to do this in the rain? Should have taken a nap. 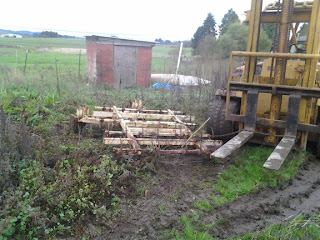 My brother and I went to a garage sale where there were boxes of record albums. I found a George Jones album. I followed a record collector who got all the prize albums. The albums were in excellent shape but I'm really not a Deep Purple fan. No Jimmy Hendrix, the Beach Boys were played to death, found a Cheech and Chong album but it was really bad. Bought a Freddy Fender album just to annoy my family.
Today I got the great idea of installing the Dynaco SCA-80 in the living room. I bought it mostly so it would match the Dynaco AF-6 tuner and would fit on the bookshelf.
The amp is somewhat noisy. There seems to be a lot of hum, especially in the phono section. I read somewhere that using coaxial cable would reduce the noise. Instead I used aluminum foil tape on the low power input leads and grounded it to the frame. It seemed to work.

I also decided to try out the DCM Timeframe 350 speakers. I think I am going to have to redo the second speaker.
I compared them with my Optimus 7 pro (bigger than the regular Optimus 7's with a bass port in the back). Frankly, the Optimus 7's sounded better. They were brighter and had better sounding bass at normal listening levels. The TimeFrames sounded better at high volume but took a much different bass and treble setting to sound good to my wife and I. Sure we are Philistines, but we like what we like. The TimeFrames sounded muffled at low volumes. The Optimus 7's lacked the deep base but overall were easier to listen to. Not sure what it means. Might be that we are spoiled by listening to MP-3 players. 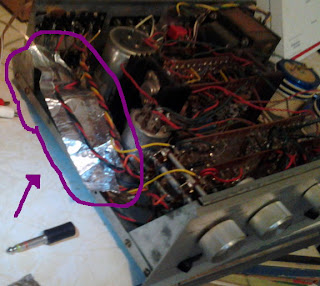 I would like to find the article that told how to convert the Dynco low level input to an extra regular input. You would use this input to amplify a tape head or as a second phono input. It sounds like the "special" input on this SCA-80 is an extra phono as it sounds RIAA balanced. It'd like to set it up as an input for a mp3 player or as an input for a ceramic cartridge so I could listen to my 78 rpm records but I can't find an article on doing this on anything but the PAT-4 preamp.
So the wife and I are setting around listening to the radio on a Sunday afternoon. Actually, we gave up on the tuner as we have no radio reception and switched to the little Sansa MP-3 player. I discovered I can pick up KMHD by either holding the Tuner antenna and standing in the middle of the room or by setting the Sansa MP-3 player on the arm of my chair. The Sansa is a little less awkward. 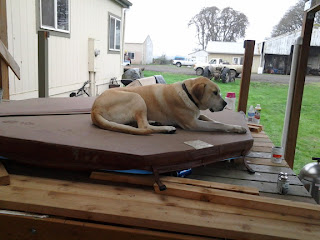 Anyway, we finally got our "free" hot tub hooked up so I think I will go kick Stanley off the lid and startle the neighbors and set in the hot tub in the rain storm.
Looks like tomorrow I will be moving farm equipment off the river bottom in anticipation of the coming floods.
In other news it looks like we will lose the farm in the end so I doubt anything I do really makes any difference.

Posted by buddeshepherd at 3:37 PM