I bought a JICO stylus for my Shure VN15 type II cartridge.
I mean I really did it!
Yes my dear readers I spent actually money on a piece of new stereo equipment!
I am setting in my old Lazy Boy recliner listening to The Nitty Gritty Dirt band, Symphonion album. I am amazed at how good it sounds.
For those of you who have followed my misadventures as an "audiophile," you may have picked up on my skepticism. I just don't have a "good ear."
Then there is the issue of buying records for $1 at thrift stores. I do have a few gems but frankly my "HiFi" system is a hodgepodge of components which I have scrounged and not quite properly restored. I realize that myself and so I am reluctant to spend real money on anything.
While there was a time I would not have been caught dead listening to the Nitty Gritty Dirt band I am now old and I can listen to what ever the $%^&* I want. Like I could possibly embarrass my daughter anymore than I already do.
I must say that there are very few things I have added to my "HiFi" which have made audible improvements for the better I am amazed at the sound of this stylus and cartridge.
The Shure VN15 came with the Dual 1019 I purchased from a lady in Portland. She had it advertised on Craigslist and had been packed up in the factory packaging and stored for years. If you recall I reworked the mechanism with an 8" crescent and a big screw driver. However, the stylus was broken and I installed a Stanton D71EE which I already had.
I was never all that happy with the Stanton. I like the elliptical stylus especially for the scratchy records I listen to. It always sounded a bit dull to me.
My main cartridge over the years was an Audiotechnica AT155LC until I lost it in a move. It was a bit overkill for what I used to listen to but it was really a sweet sounding cartridge. After getting back into vinyl a few years ago I found I really missed the bright and accurate sound of that cartridge.
Well, today I got a notice that I had a package at the post office. Finding a parking place in Amity is a bit of a challenge-I just parked on the wrong side of the street, those idiots have totally ruined parking, it is just hard to comprehend what a bunch idiots run the city.
Anyway, I had to sign for the package as it came from Japan. I was a bit worried it would be radioactive but I can't find batteries for my geiger counter so I was unable to check it.
I anxiously waited for evening so I could instal the stylus and give it a try.
I put the family to bed and in about five minutes had it all installed. Perhaps tomorrow I will read the included instructions.
I was amazed at the sound quality. It is clear. Not too bright, not to dense, just right. Somewhat warm as one would expect from the vintage shure type II cartridge. I am perhaps not good at describing the sound as I don't really have the proper audiophile vocabulary.
The first album I listened to was the Nitty Gritty Dirt Band, "Symphonion." I chose it because it opens with the sound of rippling water and it has a wow on the first track which always causes tracking problems.
I was impressed. There is little background noise and it picked up the delicate sound of the water. It is well defined sound, not fuzzy on the quiet edges of the sounds.
I also tried out my Commander Cody album which I bought because of the cover and that it has the most heart breaking trucker song ever, "Mama Hated Diesels."
The album has so many clicks and pops and it so worn that I couldn't tell anything.
I also gave the Allman brothers a try. I like their version of Statesboro Blues and I have yet to find a Blind Willie McTell album at the McMinnville GoodWill store. Perhaps I should try "Treasure Attic in Amity..."
I couldn't tell a big difference on Statesboro blues, it always seems a bit muddy sounding, (no offense to MuddyValley nor do I mean it sounds like a trombone). However on the next track "Stormy Monday," I was quite impressed. I like the warm sound it gives the lead guitar and the contrast between the loud and quiet passages.
I am currently listening to my old Baby Advent speakers at low volume. They are not the best speakers in the world but I can't hear the rattle that one discerning ear picked up on first listen. The Dynaco speakers would be better but I use the Advents more at low listening volumes-meaning late at night.
My only regret is I should have doubled my money and bought the SAS stylus. JICO puts a little more effort into that stylus and it really is a long term sort of purchase so I should have just bought the best. 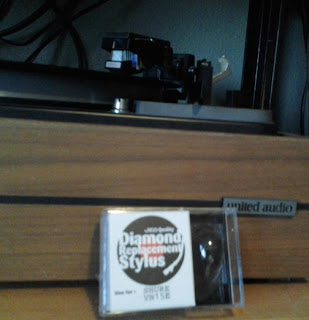 An important consideration for Dual 1019 owners is the contacts in the headshell. I first clean them with a pencil eraser but you have to be very careful as they are little spring brass connectors and the mounting points are VERY fragile. Note that everything is now 40-some years old.
I applied DeOxit Gold to the contacts before installing the headshell on the tonearm.
Should this post attract anyone who is seeking info on the Dual 1019, you have to be careful installing and/or removing this headshell. Dual used a funky cam and lever setup that is not exactly intuitive. There is a metal lever on the side of the headshell. Since I am avoiding work and posting from out in the shop (a couple days after first post) I can remember if you push it forward or pull it back. Just don't force it! AND put something soft under the cartridge as the headshell could slip from your fingers and land on the needle. It can just drop off the tonearm/top headshell mount.
To put it back on you look for the notches in the top of the headshell mount back close to the tonearm. Make sure the brass springs don't get out of alignment as those are your contacts. There is no need to force it as when everything is aligned properly it goes right in. 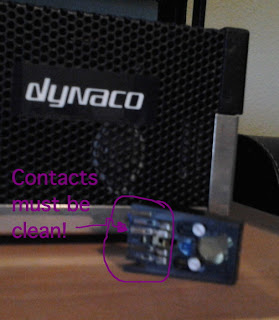 For those who care...
The whole system is as follows: Dynaco PAS-2 preamp, Dynaco ST120 solid state amp, Dual 1019 with Sure V-15 type II, JICO stylus, Dynaco A-25 speakers, Baby Advent secondary speakers.
Have been using a Rek-o-kut K33H with a Fairchild 282 tonearm and a Shure hi-trak cartridge.
Alternate system has a Kenwood KA3500 amp.
Posted by buddeshepherd at 12:09 AM