If you will look back to the post, "A Fool and His Money," which is not a commentary on the election, but rather a discussion of a my vintage stereo obsession, you will note that I purchased a Dynaco SCA-80 integrated amp off eBay.
I bought it mostly because it is one of the few pieces of home stereo that will fit on a standard bookcase. Well, and because I have a matching Dynaco FM-5 tuner. And I think the aluminum faceplate is kind of cool. And because I am an obsessive maroon who can't be content with just one of something, no I have to have the whole stinking product line. So much for financial independence for me. Going to the poorhouse $2 at a time. Some people have the casino to blame, I have GoodWill, ebay, and the GarageSale store to blame. Certainly not my own lack of self-discipline!
So, I have been waiting anxiously for the chance to try out this latest example of my need for modern behavioral medication.
I plugged it in Sunday night and was impressed by just how bad it sounded. It had a distinctly "dead" sound as if all the high frequencies had been cut off. There was a decent bass response but it also sounded somewhat muffled. One speaker kept cutting out.
I tried the high and low filter switches and they did change the sound. I liked the high filter. It was good for hiss and for filtering the white noise that comes from a tuner that is not quite tuned in.
I cleaned the switches with contact cleaner and then applied DeOxit Fader lube to the scratchy volume and balance controls and to the speaker selector switch. This helped, although I made a bit of a mess. I do not have a delicate touch.
This fixed the speaker problem but then the input selector switch started making noise when switching between sources. Not only that, but the sources would bleed between the settings.
I was testing it with my old iPod and a tuner. I could hear the iPod in the Phono setting and the tuner would not give any sound.
I got frustrated and put it away.
Last night I tried it again.
I cleaned all the contacts and treated them with deOxit. Carefully... I hooked up several inputs and some decent speakers.
I found that by holding the selector knob just right I could get sound from the Tuner setting.
I started really looking at the selector switch. Things just didn't match up. I took the knob off. The pointer on the aluminum knob was pointing down and the set screw was up. So I just gave it an extra twist. All the way around. (It was turned off at the time) 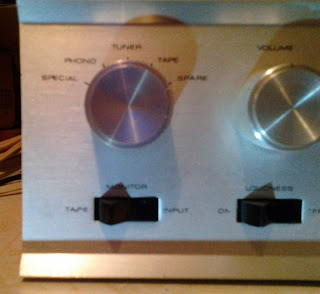 I turned it back on and suddenly everything was better. The sound improved, there was very little bleed back though the switch. Only on certain combinations which I don't remember this morning.
Upon further research I have found that not everyone like the Dynaco SCA-80. The word is that it is a dull sounding amp. The worst of the "sand amps," I have seen it described. ("sand" referring to silicon, silicon as in sand as opposed to silicone which refers to Pamela Anderson)
I do not have it in the living room. I've been leaving it plugged in with my Kill-a-Watt, to see how much power it consumes and how much heat it products in the process.
In conclusion-as I have to go to work eventually. (Although my daughter is home sick from school again and has not woken up yet and I can't actually leave the house yet.)
It is not bad. My Kenwood KA-3500 still sounds about the best of anything.
I had hoped I could use the "special" setting on the input selector to make the digital TV sound the same volume as everything else. However, the special setting is a very low level like the phono input. Somewhere there is a kit to upgrade this. I will probably never get it done...

Some Dynaco links, A rebuild by someone who also bought the amp because if fit on his bookshelf.

1. A link to a page with useful links: Click Here

2. Really good info on upgrading the Dynaco solid state PAT-4 preamp: Click Here
(I should have noted earlier that the SCA-80 is a combination of the PAT-4 preamp and the ST-80 solid state amp into an integrated amplifier. The SCA-80 doesn't have the bad rep of the Stereo 120 but is not considered really top of the line. I have an ST-120 hooked to a PAS-2 preamp and non critical ears. It sounds ok and doesn't run hot. But, I generally listen at low volume.)

5. A good place to get parts is Update My Dynaco- specifically upgrades to the power supply on ST-120 which can be problematic-(as in smoke).
I've bought from Update My Dynaco, and was happy. They do rebuilds and have auctions on eBay.  Click Here For link to their website
Posted by buddeshepherd at 7:48 AM