If anyone would like to contribute a couple thousand dollars the PayPal button still works. If NPR can get people to donate millions why can't I? I will play "Puff The Magic Dragon," if someone gives me a million dollars.
This never ending drizzle has stopped the planting which is my primary source of income. Hay sales is my secondary income and it never got started. I did sell a ton of chicken feed yesterday... 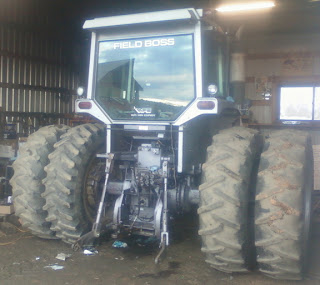 That didn't even pay for my new rear window. As you can see the tractor is ready to come out of the shop. Right now it is actually hooked to the drill. I attempted to get my GPS to work but the stupid PC tablet won't recognize the Belkin Serial to USB adapter. Belkin is crap, never buy a Belkin adapter. It doesn't matter that they are crap, the stores still sell them, but they are crap.

Speaking of being broke and things being crap... Daughter went to the Dentist last week. I stopped by ValueVillage and much to my surprise there was a nerf vulcan machine gun. It was complete with the ammo belt and the tripod. We brought it home and rounded up all the nerf ammo and gave it a try.
It is a piece of crap. The anticipation was much more than the resolution. It eats batteries, has limited range, and the belt jams. The plastic is pretty cheesy and the belt jams all the time. I can't believe it got all those 5 star ratings on Amazon. A fool and his money are soon parted. At least it came from a thrift store and I didn't pay $50 for it. 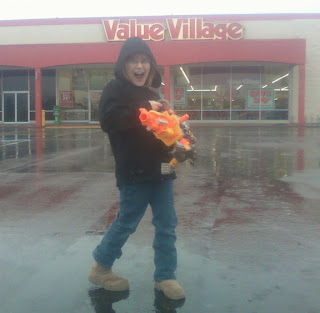 Which brings me to the expensive crap I bought last year. A Plews electric grease gun. The Plews "ProTuff" 18 volt grease gun is total crap. The first one split the casting the first time I used it and now my second one has failed. The motor stopped and the trigger is jammed.  It is made of cheap plastic and you know the internals are just as cheap. I wonder if regular Chinese folks like you and I are embarrassed by the absolute crap that has their name on it. Sort of like working for GM in the 1980's, I suppose.
The sad thing is that it was not that much less expensive than an Alemite. Especially now that is totally useless. I guess If I can return it, otherwise I will take it apart and see if I can totally ruin it.
If I ever get to use my grain drill...I have 52 grease zerks to grease and the electric grease gun is pretty handy.
Perhaps I should now go to work.
Perhaps we should start a betting pool. Will I get stuck today? How far out in the field before I get stuck? How many tractors will it take to pull me out?
Have a nice day...
Posted by buddeshepherd at 8:35 AM