Why I am going insane

Part of it is the sheer volume of worthless crap on our farm. We can't afford to buy a good truck or a sprayer or an irrigator but we have tons of worthless crap that we think we will fix up someday.
This morning I took advantage of the frozen ground to attempt to get a 55 gallon drum of molasses out of the back of a box truck which for some reason is parked in a floodplain in mud. The box body needs to be removed from the truck to be used as a chemical storage unit but for some reason we think we will fix the truck.
This is a stupid idea. Especially since rats moved into the cab and since it leaks a steady stream of oil out of the oil pan and it has been driven.
Of course I attempted to move a 250lb drum by myself and it was icy. I got it onto the pallet on the tractor forks but of course the tractor forks had sunk as of course it is a 1964 Moline Jet Star with an equally vintage loader and the hydraulics just don't hold as well as they once did.
Dropping 55 gallons ($100 value) of molasses from a height of four feet makes quite an explosion even if it is 32 degrees outside.
I salvaged five gallons!
I am covered in molasses. It actually does taste sweet with a faintly salty aftertaste.
I put my coveralls and shirt in the washing machine and start retracing my steps with some wet wipes.
I am a bit grumpy at that point so I stop for coffee time.
My sister in law is making lots of copies and I am not sure if that is why set the uncle on edge or if it was my rant about the amount of crap setting around or if was my comment about the copy machine being an antique or if it was my comment when I thought the door was closed in response to the confusion about when the copier was purchased and when the toner cartridge was installed and the standard for of argument employed at the shop. Where everyone argues about totally different things but thinks they are arguing about the same thing.
My employee was there in time for coffee time and seemed to be in a helpful mood.
But, I left the tractor setting with the molasses covered pallet and two half buckets of molasses I had salvaged.
I went to the house to get insulated coveralls and more wet wipes to clean the steering wheel but before I returned I spied the dog control truck and so I stopped to put the dogs in the truck for a quick get-away and then someone wanted to talk to me.
A customer came after steel and the uncle needed the tractor. It is his tractor after all.
Soon I heard my name called.
He pointed out to me the molasses on the forks and gave me pretty explicit instructions on how i should clean them off.
He suggested ether, or perhaps brake cleaner. I asked what he thought about water but he really didn't think water would do it.
I was a little annoyed and may have said a couple bad words while I was driving away. (I have got to watch that problem.)
I decided I would move my pallet while I was at it.
I thought it was kind of funny that the whole metal cutting and moving process was stopped due to molasses on the tractor forks and I admit to a bit of humor at the thought of them actually standing there waiting for me to clean the forks.
So I found an unfrozen water hydrant and hosed them off. 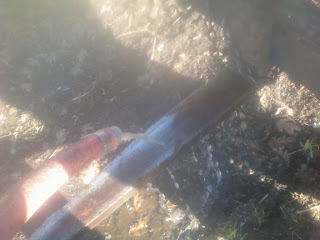 The uncle made another trip to tell me I needed to use brake cleaner.
I decided to take a little longer.
Then my employee was instructed to pick up all the drips of molasses off of the driveway. 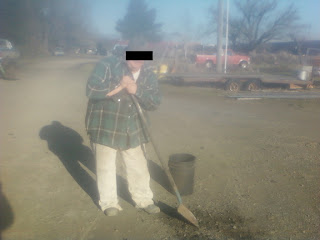 Apparently I did not get all the molasses off of my phone. It made kind of a soft focus effect. If you look in the background you can see some of our crap. We have more!!! We love crap!!!

I could not longer be angry or annoyed.
It had gone into the realm of the surreal or is it absurd.
My employee did a very good job of shoveling the gravel.
My uncle was happy with the emplyee.
I know he heard me swearing. I have got to stop swearing.
I just had to come into the house an make another post. Sometimes I can't contain all the joy and happiness bubbling within me!
Posted by buddeshepherd at 11:48 AM