The sick day that wasn't...

I feel like crap this morning. I had a cough and the sweats yesterday. My 92.9 year old father has been coughing for a week so I figured it was but a matter of time before I worried myself into a fever. Which I have done.
My daughter is looking out the window at the frost. She thinks it is beautiful. It is covering the ground almost like snow. There is a layer of fog above the trees and so everything is white. The air and the ground.
I have to make chicken feed today. So, I have to start the truck with the 6-71 Detroit in the cold wet fog. I did not hear fire sirens last night so I am assuming that the block heater did not burn down the shop. I suppose that is a good thing... Then I have load my old boxes and pallets on the truck and take them to the neighbor where I will get more 800lb boxes of vetch, oats screenings and wheat screenings. I need to also get some camolina or canola mean but I can't afford it. Perhaps I can find more clover screenings.
The Paul Bunyon-esque fellow is also coming to work on the carport. He refuses to take money for his work but needs some hay. I asked him yesterday if he was angling for free-hay-for-life and he said he was. I suppose this will end badly.
On the other hand a fellow who didn't pay me for a year and a half gave me advance payment for 25 ton of hay and so I can actually pay my rent and the stacker payment both. (I think)
My neighbor was laughing at me yesterday. I had to go and move our combine and borrowed truck out of his shed. They are not so new.
I told him that one day I would be a well off and successful farmer and, and, and, and, well I had nothing to say at that point.
Finally I just sputtered out that I would be a lot less pathetic and went back to work.
Last week the daughter and I went to the zoo.
I commented that I thought it was odd that the Giraffe was outside in 40 degree weather. I'm not so much of an expert but I planted for a fellow who takes in old zoo animals and he told me of the difficulties in keeping a Giraffe in the cold wet Oregon weather.
I guess he was right.
They killed him. Click here to read an interesting blog by MaxRedline. Scroll down a bit to read the short section about the giraffe. I tried calling my zoo animal rescue friend but he didn't answer. I would try again but I have short attention span.
A photo from last week... 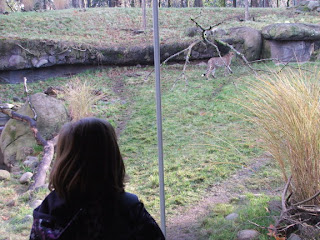 Posted by buddeshepherd at 8:14 AM