My cousin gives me a tractor!

My cousin gave me a tractor. I like to think of it as a Christmas Present. Actually I'm going to give him $1,000 worth of planting. But, I hardly ever give him a bill for planting as he helps me out all the time so I guess we are talking about imaginary money here.
My plan is to put a loader on it and use it to load hay. I also plan on loaning it to the guy with the weather station at Muddy Valley but that probably won't work as it is a hydro and the hydro is a little weak. I don't know just how weak. It moves but then it is not 75 degrees outside either.
So here I am a rich farmer with a new tractor.
Highly subsidized I might add... 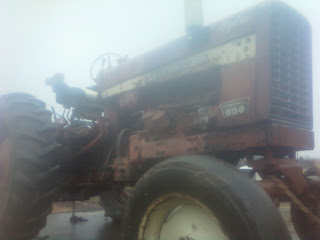 Which gets me to another subject.
I need a new phone.
And then there is the thing that has bugging me for a day or two...
I got into a discussion about wolves the other day.
I sort of dislike most people in the city...
Read this story about wolves. Read the comments. We are set up for a class struggle. Those durn farmers who own land and are living off the government subsidy programs. We live in the city and drive on subsidized roads and love that food from China and Brazil and the cheap crap we buy at whatever the Portland high class knick-knack shop is that buys from the same factor as Pier One and Wallmart but ups the price and we have lots of plastic and solar power and think we are wonderful because we wear scratchy underwear made by peasants somewhere. Not to mention our fair-trade coffee that kills song birds.
The way to solve the wolf and cougar problem is hunting permits. Hunt cougars with dogs during a certain season. Allow wolves to be shot on sight around livestock, with a permit.
These are quite intelligent animals and they will want to avoid getting shot. So, they will stay away from people and run away from dogs.
This lesson could be transferred to other less desirable species but I don't want to get put on another list at the fusion center so I will leave that one alone.
Allowing wolves to kill livestock and then compensating the farmer just teaches wolves to kill livestock.
Not hunting cougars with dogs makes them not afraid of dogs so you can't chase them away from your house.
Wolves were wiped out by the FISH AND WILDLIFE service on purpose and by using methods like shooting them out of an airplane. You will not wipe out the population of anything with controlled hunts, permits, hunting seasons, and whatever.
I just wish more city folks would try dancing with wolves and cougars on a regular basis. We need less of them...(city people)
Posted by buddeshepherd at 9:12 AM