I sort of hate farming. In theory I love farming. Being your own boss, growing crops, working ground (it is like playing with Tonka trucks but on a huge scale), doing different things all the time, carrying through with a plan. And I like how things work together.
I hate farming in that I never succeed. I hate farming because modern farmers are dickheads. I hate farming because I see people who are morons, who are arseholes, who are totally undeserving, who probably are less endowed than I, but yet they are making bucks up...
I've been attempting to chop clover silage for my neighbor. It is not working well at all.
The windrows are just a touch wider than the pickup on the chopper. We have another one but it is broken and nothing ever gets fixed here at poop and sit back down in it farms... (PSBD)...
I would complain to the farmer but I have not the slightest idea why he hires us to chop his clover anyway. Who wants 30 year old crap running around in their field?
I watched the clover silage process at other neighbor's farm. I have been trying to score his sixty acres for the local dairy for the past couple years. His silage guy came in with a 600 hp Krone and 15 trucks and they did it in three hours. It would have taken me a week- at the rate I'm going at.
Our utter piece of crap IH blew a tire yesterday. We can't work after dark because we don't have tail lights and my little helper doesn't know how to fix them.
The silage chopper has had multiple bearing failures. But then again, it never got serviced at the end of the season last year and barely was serviced before starting silage.
Today I wore a hole in the spout liner which cause the clover to not fly out of the spout which resulted in me digging silage out of the spout for a half hour.
I took it home to work on it. A new liner from New Holland is $400. My little helper is a little short on energy. We have enlisted another broke neighbor to help haul silage. His helper is quite capable. He dove right in and helped change the spout. He pays attention to what we are doing and asked intelligent questions. I'd love to have him spend a week doing everything my little helper won't do.
Two of his previous employers have repeatedly warned us that he is a kleptomaniac. Of course he is... If something is too good to be true, then it is...
On the way back to the field I blew out a tire on the chopper. The little car that was passing me when the tire blew did not stop to help. (Probably was in a hurry to clean the poopie out of her pants.)
I sat in the ditch whilst waiting for my little helper to bring me a tire and watch the real farmers go by. No one even waved. 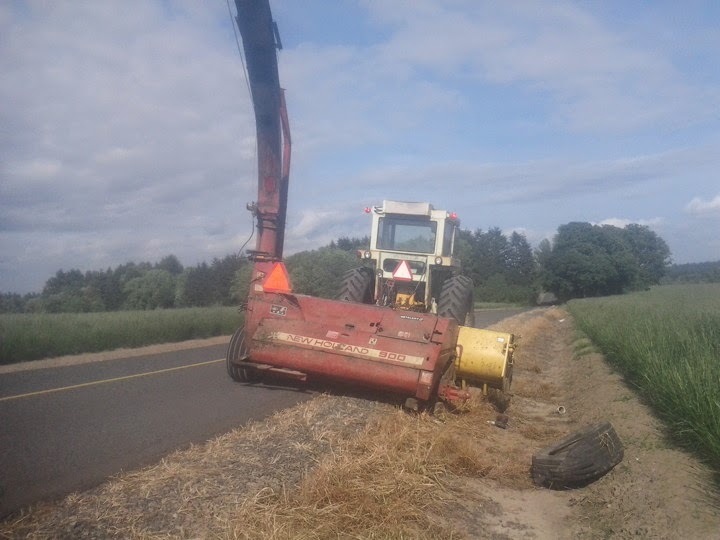 I hate antique crap, I hate farmers in general, I hate nice weather, i hate rain, I hate silage, I hate silage choppers, I hate old equipment, I hate working, and I've never really been fond of cheese.
The ONLY nice thing that happened to me today was the smile on my daughter's face when I picked her up from school on my old Triumph. I suppose that not having your stomach in a knot for 15 minutes out of the day would be a glass half full moment for most of my highly spiritual and agriculturally successful readers.
Perhaps tonight I will have that wonderful dream where I have a D-8 cat and push everything on this stinking farm into one big pile of recycling....
I need to register the farm name I think as well. Perhaps I'll just go by the acronym. PSBD or is it SSBD?
Posted by buddeshepherd at 12:35 AM