I posted about J.A. Freeman and Son's awhile back. One of the employees left comments on the post. If you are interested click here.
Someone should write this history of the Freeman Baler company.
I think we have the second and third balers that they made.
J.A. Freeman and Sons was one of the last old-style family companies left in American Agricultural Machinery production.
I think that the Darf Rake company (Nikkel Ironworks) might be the last.
You could go into Porland, walk into the company office, AND they would give you a tour and a free hat!
The drafting room was amazing. Huge old multipane windows and old wood drafting tables. The whole building was like a tour of the industrial revolution. Old milling machines, old wood shelves, a little dust here and there....
Freeman made the same baler for decades. They were virtually made by hand out of off the shelf dimensional steel.
They featured huge bull and pinion gears instead of a gearbox and a massive flywheel to store kinetic energy. The massive plunger compressed hay at 75-85 strokes per minute. Everything on the baler was rebuildable.
We have two 1970's Freeman 200's that have been rebuilt countless times. The reason I don't use them is 1. The Wisconsin V-4 engines are tired, 2. They need to be rebuilt again and I don't have the time to do it correctly. 3. Rebuilding a knotter 800 times does not give you a new knotter, welding in a new top  on the bale chamber is not an advantage if you get it 1/8" to one side. 4. They make a huge amount of noise, have a 1930's design for feeding hay, and you have to get on and off the tractor to put them in gear.
And finally... I wanted to make 14x18 bales and the kit to change the 16x18 baler to 14 x 18 was $6,000. (What I really want to do is find a Freeman 370 with a diesel engine on it and convert it to a 15" chamber. I think I could still get the extra bales in a stack but they would be easier to pick up.
When our running 200 busted a pinion bearing housing I bought a New Holland BC5075. It turns at 97 strokes per minute. It is shiny and new. I baled 7,000 bales with it and broke three bales and two shear pins in one entire season.
Someone needs to write a book about the Freeman Baler company. It is an incredible niche market baler. The slow speed and the design of the feed system makes it the best alfalfa baler ever made. It does not knock the leaves off the plant.
The balers are so heavy that we used to make 85 pound 16 x 18 x 46" 2-tie wheat straw bales with below 12% moisture. 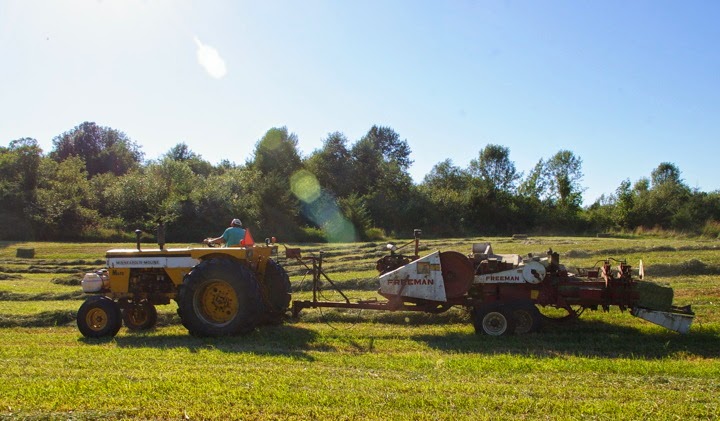 Baling with the 200 last year two days before it exploded...
Posted by buddeshepherd at 7:25 AM