I have an iPone 5s. The theory behind getting the iPhone was that I could use it to keep records and take credit cards and get the weather every 90 seconds.
This is a good theory.
Here is the problem.
The iPhone uses apps. Most apps are written by morons who don't use the apps.
An excellent example of this is the invoice manager I actually purchased for $5.99 from the Apple App store.
It had good reviews.
It is called Invoice Manager Pro. I figured that was a pretty descriptive name. I downloaded a free demo. It was easy to use, but the demo didn't save the invoices. 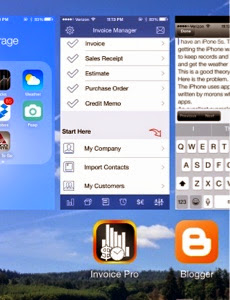 It turns out that the full version, in theory, saves invoices, but I just can't find them.
Here is the deal...
It doesn't matter what wonderful features you have, if you can't figure out how to use the app within four keystrokes then it is pretty much pointless.
I just clicked on the step by step instructions. It is walking me through changing the color of the invoice. In my humble opinion, that is absolutely and completely stupid and useless. How about white with black lettering? A custom logo is just want I want on my so far imaginary invoices.
You don't really need a step by step tutorial, you click on the invoice button, it has a pretty annoying setup but you can input name and phone number and then add products. It wants to set up inventory to let you sell items which is really annoying, that is probably where I went wrong.
I made out several invoices last week, I emailed a couple and printed a couple more. But, they are not on my phone.
Apparently there is a cleverly hidden, "save" button.
Who knows? This app is going in the trash. 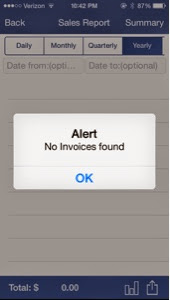 I tried the Apple program called "Numbers," but like all free Apple programs it almost does what I want but not really. There are only so many hours in the day I can sit on the toilet and figure out how to use my iPhone with out my butt going to sleep.
How can it be that difficult to write an App that does invoices.
An invoice requires a few basic items.
1. Your name and company name
2. The Customer's name and storage of said customer's name for future reference.
3. Date of invoice
4. Spot for invoice number which should be generated by the program
5. Item, number of items, cost per item, total cost.
6. A database of invoices searchable by item, customer, date, invoice number.
7. The ability to get the info out of the phone, email, text, print, export in quickbooks format.

What would be nice...and what I would pay money for.
Management of the information, as in sales per month, a place to enter payments, a receipt manager, the ability to attach a photo of a check or weight slip to the invoice, buttons to indicate payment, credit card payments, basically the functions of one of those companies that competed with Quicken before Intuit bought them all up so they could continue with a hard to use, non-intuitive, and annoying program.

It really can't be that hard to make this App and it shouldn't be that hard to actually get the info to people who want to use it.
But, here is the other problem. You can no longer use the internet to search for reviews of the best products. (or find people's phone numbers.) All the reviews seem to be scams to make money out of getting paid for clicks on your stupid phony website that does paid reviews or overly positive reviews on products you have never used.
I don't really want to run my business on my iPhone but I might if it were just a little bit more intuitive to use.
On the other hand, I see a lot of smart phones and I see people using them in businesses so perhaps I'm just exceedingly dense...
I wish I had my $5.99 back!

Note:
1. You can see from my photo that I am using the Blogger app. The Blogger app also kind of sucks. You are very limited on adding tags or formatting in anyway. However, you can take photos with your phone and post them without editing them to size. (I think, as no one has complained)
2. Apps mostly are horrible versions of the real program which have all the features you actually use removed. I own an Apple eMate which has limited programs which actually have usable features, (like entering information into an invoice template) I once owned a PowerBook 100 which had a screen you could read and simple but useful programs. I do not believe that usability of computers has improved since OS 7 but speed and useless features have increased dramatically, and Apple has yet to include any useful templates other than mortgage analyzer in any of their potentially useful programs.

UPDATE: (Wednesday Morning) I went through the tutorial last night and made up a new invoice following the instructions exactly. I still have the invoice after shutting down the App and opening up again this morning. We shall see...  I'm not sure what I did that was differing from the first five invoices I made. It could have been the update I downloaded. If so, that is a serious problem on its own.
Posted by buddeshepherd at 11:28 PM