It reminds me of the time the rotor came apart in my brother's Ford Ranger going past Mt. Shasta at night and we fixed it with chewing gum and the aluminum wrapper the gum came in.
A couple days ago I had several sales for pig feed.
As soon as I discovered my customer was on his way things started to go wrong.
First of all the forklift would not start, secondly I got a call that a truck was on the way to collect 780 bales of straw, and it all sort of continued from there.
I started with fixing the forklift.
It would seem there is a second fuel filter that has never been changed. It was somewhat covered in oil and it was leaking.
Diesel fuel is horrible nowadays. Has water and alcohol and whatever other crap the clever folks put in fuel to make our vehicles run badly.
We did not have the filter.
It had a rather large leak which caused it to spray diesel on the fan belt. Fortunately someone has been drinking a lot of Coors Original Banquet in the neighborhood and I found a can nearby. Equally fortuitous was that it was empty, otherwise there would also have been the job of pouring it back into the horse...
I'm imagining that the can probably came out of the back of the my neighbor's pickup. He picks up cans alongside the road. 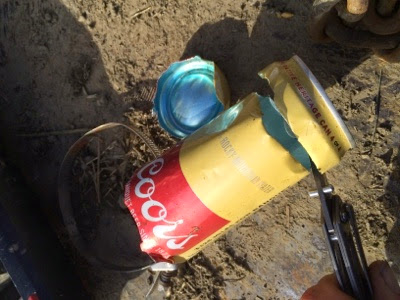 A little work with my pocket knife and an extra big hose clamp out of the scrap barrel and I was back in business. 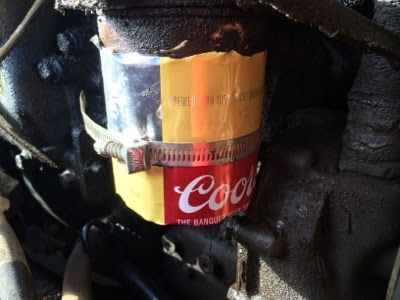 Which is not to say, that things improved all that much.
After dumping boxes of wheat screenings, peas, flaxseed, and a random half a ton of buckwheat, into a powerbin which I have semi – permanently borrowed from Wilco, I discovered it would not feed out the auger.
So, my customer ran the auger while I poked the mixture through the intake with a long piece of PVC pipe. I discovered he is quite a safety conscious guy.
He moved really fast when I fell into the bin.
It was ok, there was a screen over the auger... AND I had eye protection!
have a nice day!

Posted by buddeshepherd at 7:21 PM