Freezing rain, meadowfoam, the usual randomness of my life...

Yesterday the sun was shining. There was a pretty good breeze and the ground was drying out. The temperature seemed to stay a little above freezing. I didn't check a thermometer but the ice in the buckets didn't melt, but the mud puddles didn't freeze. 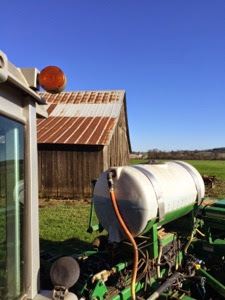 This morning we have freezing rain.
I was scheduled to haul manure today. The pile at the dairy is getting pretty high and the dairy fellow called to see if my little helper wanted to drive truck.
"Well," said I, "our little helper is off for the winter,"
"Couldn't you call him to come in for a day," said the dairy man.
"Yes, But, I just can't handle the crying," said I.
Here is the deal...
The helper took the silage chopper apart as he didn't want to work on the old White 7800 combine. This was in October when we were trying to combine the last five acres of flax.
I asked him to clean out the White and remove the hangers for the concaves as they were broken in some sort of catastrophic plug up. This is not a terrible job, but not a great job. The feederhouse comes off pretty easily.
The helper thinks the White should be scrapped and so doesn't want to work on it. He cleaned out some of the straw, removed the feeder house, discovered both hangers were broken and sat down at the coffee table for an hour waiting on instructions, then took off early.
Out of frustration I told him to work on the silage chopper and we hired the neighbor to combine the flax.
This was on a Friday, on Saturday he asked to take the day off to spend with his grand daughter. Monday he was sick, for a week, Sunday he texted that he would be in Monday.
It rained and he didn't show up.
He showed up the last day of October, walked in at coffee time while I was sitting at the table attempting to balance a feed ration using Buckwheat, Flax, barley, peas, and filberts hazelnuts. I was a little uptight.
He announced that his little vacation was over and he was ready to come back to work, then he inquired as to, "what shit jobs do you have for me to do?" He was attempting to be light hearted but it was just not the right time.
I looked at my brother and my brother looked at me and my brother said, "We are out of money and won't have work this winter..."
Later, I got a text asking if the little helper was being punished for not showing up. I replied in all honesty that if he would have been working during the nice weather we would have kept him on, but since he was gone we spent every cent we had on paying rent and paying off the loan.
I have not heard back from him.
I am worried about him but I know that he will do what he always does, he will talk his landlord out of three months rent, he will borrow money from someone (with the full intention of paying it back), and he will come back in the Spring, get a substantial advance, and complain about all the things that we didn't get done in the winter time.
But, this wasn't what the post was about...
This morning there is freezing rain and the dairy fellow texted me that it is not a good day to haul. I'd figured that...
There is a two hour delay for local schools so I made Lulu and I cheese omelettes and stoked up the fire. 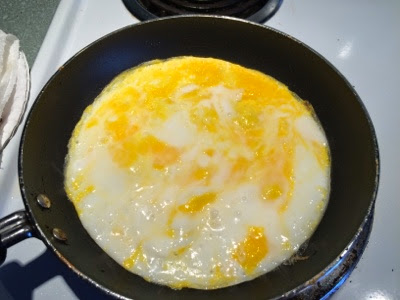 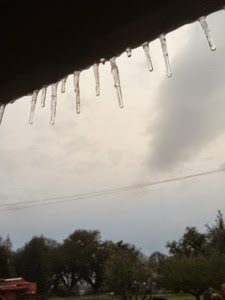 But, I digress,
the point of this post was to show you the nice weather from yesterday and to show you a photo of MeadowFoam which I no-tilled last month. It is looking good. Has a good population for a seed rate of 40lbs per acre.
Meadowfoam makes really good honey and so I saved what I vacuumed out of the drill for MuddyValley. Unfortunately, someone got a little wild loading hay out of the farm and knocked the five gallon bucket over into a mud puddle, so all that is left is a handful of seed, which I forget to tell him about.
Meadowfoam in bloom produces a starting white flower and 40 acres is a beautiful sight. 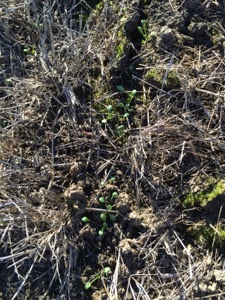 Invoice Manager for iPhone update #3 This morning I attempted to look at yesterday's individual invoices. Not as easy at one would hope. Not really enjoying this learning experience...
Posted by buddeshepherd at 8:56 AM