A duck for lunch

This year has been a good year for duck hunting in our area. Our landlord has shot more than he can eat and so is passing sharing the wealth.
He cleans them and cuts them up for you as well. I could not turn down a couple duck breasts and decided to try my hand at cooking them for lunch.
I've never really developed a taste for duck, although I do admit to a certain occasional longing for the sometimes elusive Tubetopped Bar Duck, lightly pickled in Coors Lite, or Perhaps the occasional Red-headed Double-Breasted Bed Thrasher served with a hint of shame and the aroma of Arandas for a little spice.
But, I digress...
My lovely and gracious wife is not a fan of Duck citing a long ago Thanksgiving celebration as an bad memory, but she found me some bacon and the cast iron skillet and kept me focused as I do tend to drift from time to time. 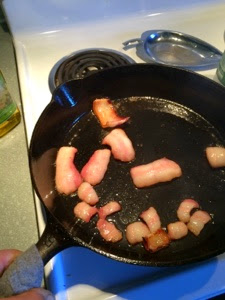 I cooked up a couple strips of bacon for a little grease and to make sure the skillet was heating evenly. When the grease was hot enough to think about smoking I dropped the duck breasts into the hot skillet and turned it to a medium heat. 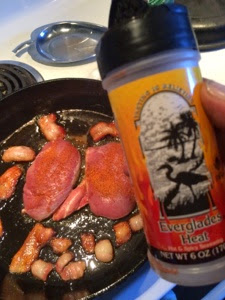 The plan was to sear them on both sides as you can overcook wild duck easily and it may turn tough on you.  I seasoned them with Everglades Heat, a spice we bought at the Pigglywiggley in Bloutstown, Florida last year and sprinkle on a little garlic because you can never go wrong with garlic.

They appeared to be browning too fast on the outside and not getting hot enough on the inside so my wife "butterflied" them by slicing the breast open and turning them over so the inside would cook faster. This was an excellent idea. 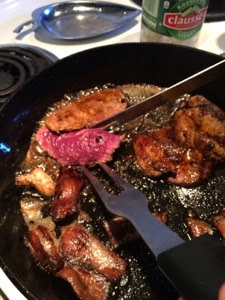 I used a meat thermometer to make sure the center reached 165 degrees. 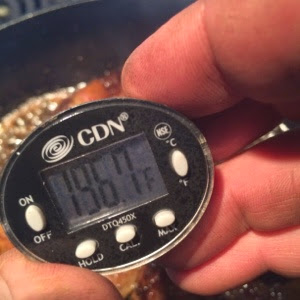 I found some homemade potatoe salad in the refrigerator and also one of these very excellent dill pickles. 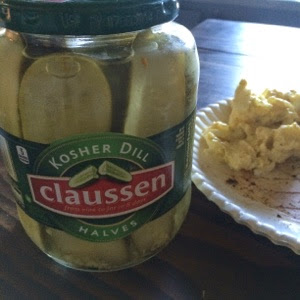 My wife made me up a cup of coffee. It was a good lunch. The duck taste was not overpowering. Wild duck is much better than tame duck. Plus, a little bacon improves just about everything. 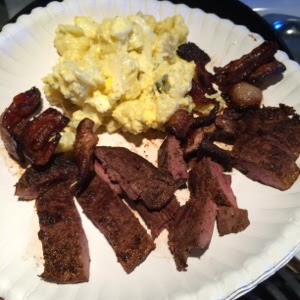