Oh NO! Those evil republicrats shut down THE PANDA CAM! Have they no shame?!
In protest solidarity I decided to engage in risky behavior. I will assure my gentle reader that this did no involve poop shrooms, one beer, and a hot tub.
No, it involved a forklift and, gasp!, no safety harness, no  hard hat, and high voltage!
This is not illegal, however if a OSHA inspector was driving by they would be required by law to stop and demand to see if I was an employee or not. I'm not an employee and I personally have no employees so I am exempt.
However, just knowing that there were no OSHA inspectors driving around was a liberating feeling. Also,  I was thinking I would lend moral support to my friend who broke his leg by engaging in risky behavior. I was one step from multiple broken bones. And if it would have started raining and dropped below 65 degrees, one hour from hypothermia, (see yesterday's post). )I do have a hot tub but have no beer.) 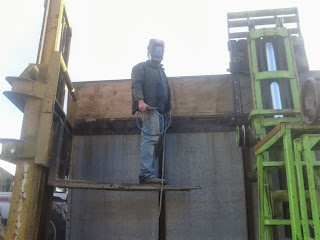 We spent all day building this simple windboard for the dump box. The top of the box is directly in line with the end of the chopper spout. This means that when you finally get a good load on the box and you point the spout at it to finish the load, it blows the all the silage over the side of the box.
Then we hooked the box to the tractor and raised it all the way to test our repairs. A seal had leaked and one cylinder was full of water. We thought we had drained the cylinders and all would be fine. Apparently something went wrong. The hydraulic oil in the tractor is now white. It is a White tractor but white hydraulic fluid means water. At $13 per gallon and 30 gallons in the tractor it will be just a tad expensive.
But it will keep us busy. More rain is on the way...
In other news...
The mantra of blame Republicans continues. It doesn't really appear that it would have taken much by the Democrats to reach a compromise. Of course no one even talks about insanity of having the IRS involved in healthcare.
Although ZetaWolf has a nice post on how to avoid the fine tax.
Glad to see that the Republicans stuck together. I see many people online have their knickers knotted. They are of course repeating the talking points which were sent to them telepathically by the DNC. This should put a spike in the NSA workload and cost the government even more money.
The shutdown is pretty interesting. It really brings out the useless stuff that government spends money on. So... they hire guards to keep regular law-abiding folks out of the National Parks but they can't stop drug gangs from growing Chronic on an industrial scale. They are busting people from smoking pot in National Parks but, once again, industrial illegal grows are not really policed.
I personally have little sympathy for government employees. In general they get paid more than I, have better insurance than I, have more job security than I, and they work for the government.
I personally would like to see the government shut down until they stop spending huge amounts of money.
How much does it cost to record and store every single bit of info transmitted by cell phone or internet vs the actual protection benefits? How much did that huge shiny black building cost?
Apparently Wall Street doesn't care much either. Click here and take no of the headline, Wall Street Rebounds as Government Shutdown does nothing...
Posted by buddeshepherd at 7:52 AM