This ear of corn is from the neighbor's field. It was planted later (as you can see from lack of denting), the plants were nearly the same height perhaps a little taller than ours, the population looked similar to ours, we planted less expensive seed that was non GMO.
This ear has 14 rows of kernels around the ear and 34 full rows of kernels.
The neighbor's field is better ground, not as much clay in the soil, better drainage and was worked deeper than ours. We just disked twice and knocked down the clods with a harrow. This field was disk ripped and possibly plowed. However, we also applied 2 ton of lime, BUT or pH was pretty low to begin with so I think that doesn't really matter in a comparison.
We did a test on a couple truckloads from our field from where I took a photo of the corn cob. Our yield for those rows was a little over 30 ton to the acre. The average for the field after we finished in the mud, counting all the down corn and missed rows, was around 27-28 tons.
The total from the neighbor's field was a little less or about the same, depending on how you figure the field size.
What does it mean?
Ask Ed Winkle, I have no clue... The fickle winds of fate seem to have more effect on our farming results than any sort of scientific/good farming practices/planning. 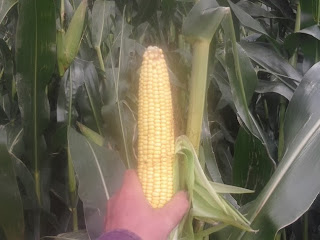 Here is an interesting article about people abducted by aliens.
CLICK HERE
Posted by buddeshepherd at 8:20 AM