I work on Sunday, lose my main customer, oversleep on Monday

I do realize most of my readers are real farmers or at least not lazy at whatever it is they do.
But, I have never made claims of greatness and there is a good reason for this.
Of course we are in the middle of corn silage harvest and it is going a bit difficult.
The dairyman was worried about his 25 acres of corn which we were chopping Saturday evening. It would have better if he would have made a few more passes with the irrigation. He was irrigating the corn with poop water and was worried there would be too much poop on the corn so he cut back the rate. This was not so good. The corn had moisture early and set fairly good ears but it had no height.
There is a forecast for rain this week and so the dairyman talked me into chopping corn after church. Something like quoting the scripture of pulling your neighbor's ass out of the ditch.
Just the same, I was a little grumpy...
I didn't get my good Sunday dinner, mostly because I cooked and did a bad job, and my Hershy bar melted as the a/c is not working properly in the 2-155. 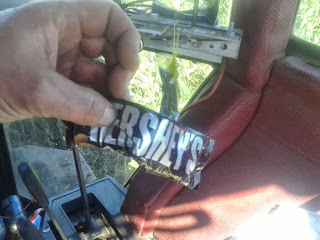 Then I got a text from the fellow who buys grain from me. He wanted feed at 8 a.m. this morning.
I texted him back that we were chopping silage for the next three days, the same as we had been doing for the previous three days, and at this very moment, and could he do it later.
He kind of took offense at this and suggested that it was not so hard to remember to grind grain every two week and he was going to have to get his grain somewhere else.
Naturally I responded in my usual fashion.
No, gentle readers, I did not offer to get up at five a.m., nor did I offer a substantial discount, nor did I apologize... No, I replied, "yeah, I'm not that reliable, you will have to do what you need to do..."
So there went $1,000 per month.
Oh well, if he would have really wanted to buy from me he would still be my customer.
Such is life...
Then in the end, we did get the field done and I could have gotten up at 5 a.m. and made him feed.
Instead I overslept. For some reason my wife but a pillow over my head instead of waking me up.
You know....
I just renewed my life insurance policy....
Hmmm, just a coincidence I'm sure...
Today we have the last field. It is ten miles away down highway 99W. It is a small field but it won't be fun...
Have a nice day!
Posted by buddeshepherd at 7:56 AM