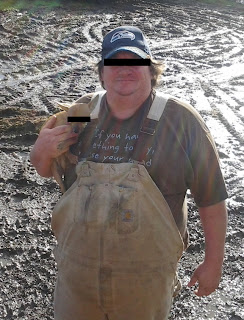 My brother and I were playing a joke on his wife's niece who has been visiting. She left her phone unattended and she was receiving text messages from her aunt.
Our plan was to send the above photo to the aunt from the niece's cell phone as a photo of the nice man she had met in Oregon. Long time readers may recognize my longtime helper. (Note the cute little doggie he is holding.)
It would have been pretty funny but in sending the photo to her phone I transposed the 6 and 9 and sent it to some other Midwesterner. Some time later I got a text response, "I think you have the wrong number."
Perhaps I should not have added, "Luv U"

Posted by buddeshepherd at 6:02 PM