We have set up the lego train around the Christmas tree.
There is a harbor for the ships sailing with supplies from my daughter's room to the living room.
There are a couple stations and a siding.
There has been drama.
The train has been chased by secret agents.
The lego cheer leader was doing a cheer routine on the train tracks and was hit by the train.
Explosives were being transported on the train which went well until the forklift operator was unloading the train and then... many were killed....
The ambulance parked on the train tracks.
So did the tow truck driver.
The train missed the stop track and tragedy followed.
The lego girl went skiing.
There was a concert with the lego rock and roller.
Here is a photo of the train.
It is an old train. We can't afford one of those fancy new ones.
We are having fun.
Merry Christmas! 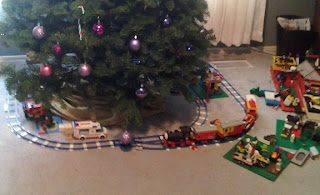 Posted by buddeshepherd at 6:52 AM