Have been otherwise occupied 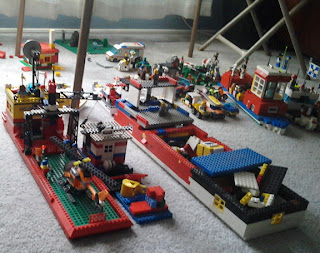 My daughter has decided that her cousins will never do anything but play their Wii. So she took apart the lego city they had all built in her room and invited her father to play legos with her instead. That has occupied the past three days. I feel somewhat honored but also there is the realization I am second string. I told her she should invite the cousins over, or go over there and that they probably had no idea she was over here wanting them to play with her.
However, she pointed out that she had gone over there and she had invited them over here and she was NOT going to beg-and i ran out of arguments after that. She reminds me of my mother and her family. I did not realize that the attitudes found south of the Mason-Dixon line were also genetic.
Besides it has been pouring down rain and it is a pain in the butt to walk across the flooded machinery lot in front of the house.
So, Sunday afternoon we built lego boats and sailed across the living room to establish a new colony on a remote island located under the card table. It was a perilous voyage.
We arrived with a scouting ship and then went back for the freighters. Everything on the colony has to be loaded on the freighters in her room and sailed down the hall into the living room and unloaded. The passage is fraught with large waves and occasional pirates.
Several rescues have been made. There were also several alien abductions, an airplane crash and an attack by a lego skeleton. However, it was discovered that really he was just lonely and misunderstood and after finding anther skeleton friend he was not longer so grumpy.
This evening we set up the Christmas tree while listening to Slim Whitman and Perry Como sing Christmas songs. Not to mention the original version of Rudolph The Red Nosed Reindeer. I dug out my record changing turntable so I could stack the albums and didn't have to flip sides every 20 minutes.

Earlier in the day a fellow who is on the NAT forum came by to visit. We had a nice time discussing farming in Montana. I don't think he has seen the sunshine yet in Oregon. He is the only person I have seen who can actually get his iPad to do what he wants it to do. He almost convinced me that they work. I am not quite persuaded.

Posted by buddeshepherd at 11:58 PM