I see there is a new article in the News Register- (Wine Country!) about the proposed new park on next to the old unlined dump full of undoubtedly toxic waste and one time proposed superfund site.
That is interesting to me as I just planted for the farmer that rents the ground. I have now officially been there a few more times than the illustrious Ken Huffer and the rest of the parks department. Except for the jail crew that does the grounds keeping. Well, probably also more than that crew as well...
I found a nice quote at the end of the article which I think pretty well sums up not only the attitude of the clever folks that run "Wine Country USA" but also illustrates what is a major irritation about parks in general.
"Huffer responded by saying the Yamhill River is already open to the public along its entire length under the Public Trust Doctrine. "The development of this park is not intended to allow or open unwanted access to private properties, so Yamhill County Parks and Recreation has worked hard to create a park design to keep park users on-site and limit accidental trespass," he said."

I respond:
1. The problem with rivers in Oregon is not so much the people going up and down them-I understand, it is for the public good... It is when they get out of the river and start wandering around on private property and stealing stuff and doing vandalism or being victims of something-like their own stupidity. Or start telling you how you are miss-managing your own land.
This they do on a regular basis...
This is why people oppose parks, rails to trails, bike paths, and anything else open to the public that is going into your backyard or down the street where you live.

2. Yamhill Wine County Parks and Rec- nor any other local or state agency is actually capable of creating, "a park design to keep park users on-site and limit accidental trespass."

As for the continuing comments about Linn and Benton Counties having more parks than Yamhill I say, good for them. How about building a park at the farm end of Yamhill County, like say on the border between Lincoln and Yamhill out there towards Rose Lodge. Then everyone could drive by the Casino and could get lost on Federal Forest Land instead of our corn field...

And Furthermore... Enough of this "Wine Country," BS. All it brings in is arseholes in short pants, people from Portland, and bicycles. The whole Wine Country tourist traps BS was started by a couple winery owners and people desperate for income after the timber industry was shut down a few years back-by the same sort of people who now patronize our local wineries.
Just what Yamhill County needed, to replace good paying industrial jobs with minimum wage tourist industry jobs!
I remember setting in a Newport City Council meeting years ago and hearing the retiring mayor of Newport talking about the jobs tourism was bringing to Newport. He laughed about it and said that while they had to support tourism now that fishing and logging had been killed off everyone knew what tourists did for the city of Newport, "They come here, take a shit, and leave," he said. Of course this was said in private session so it couldn't be reported...
But, it is oh so true...
We all just pretend it ain't so... And we have purple grapes on the police cars (funny, police cars advertising drinking and driving) and pretentious eateries, and farmers wearing short pants and Keens.
Do you realize you can do a bicycle tour of wineries? Oh yeah, and who exactly is the designated driver!!!!
I leave you with photos of Landfill Park, in the rain... It is so beautiful-wish I had a sip of wine! 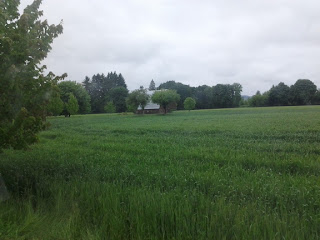 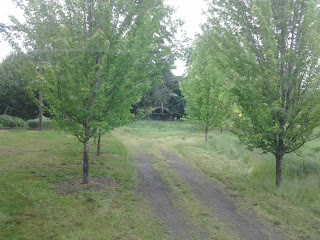