I actually work and accomplish things but in a sad bottom feeding sort of way!

I have been chopping grass for silage. I bought the silage chopper (New Holland 900) on Craigslist for $950. It is not new.
However, I would say that if you are going to try and sell something and you don't want to be continually insulted by people making you low offers based on scrap price you should, 1. Wash it... 2. Air up the tires.
But I was able to see through the grime and faded paint to recognize a diamond in the rough. Was also somewhat desperate...
Anyway, it sprung a leak. The blower on the back of a silage chopper does not actually blow. It throws the silage. I know that because the blower band broke out through the bolt holes. But silage did not shoot out the side of the chopper! 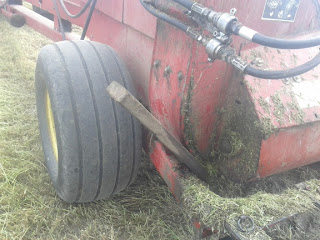 Fortunately I had a spare two by four in my pickup along with some old pipe fittings and the center section out of a failed bearing. We wedged the 2 x4 between the blower band and the frame of the chopper and lengthened the adjusting bolts with an old pipe nipple and part of a bearing. 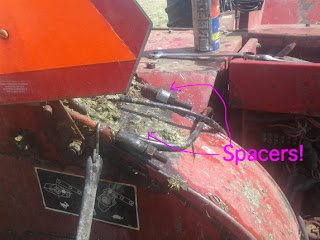 It held for a couple days and then it rained so we put a new blower band on. Well, actually we robbed the blower band off a chopper I bought for parts. So it is in fact not new.
I was quite proud that we found spacers in the tool box on my pickup. It was a very clever repair! 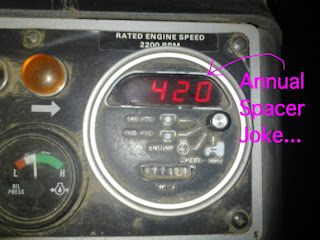 After that clever joke... here is a photo of my master mechanic! He kind of grows on you! 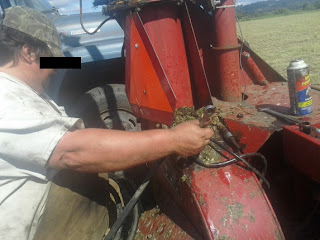 Actually he has been quite helpful since I have messed up my arm and have trouble tightening or loosening bolts with my right arm.