Sometimes things just go wrong and you get stuck and then the weather forcast changes and you are so screwed and that is farming...

I want to finish planting for this one particular farmer. I have 1/4 load of wheat in the drill which holds 36 bushels. I want to be finished and done and have it all over and I want to wash the drill and put it in the shed and forget about it all till the end of January when it is time to plant spring oats-even though it is not spring.
With that particular obsession I conspired with the farm manager to plant today.
We have had a bit of a cold snap and the top two inches of soil is frozen pretty solid. It thawed out a bit at noon but by 3 p.m. the temp was back down to 30 and it was all drying up/freezing up again.
So I started planting. I've got a 60 acre field of which I would like to do a good 20 acres which would give me just over 200 for this farmer. To get to the field you have to drive a mile down the edge of a field but the field I'm planting borders a highway.
When I suggested we try planting in the frozen sod I was thinking the field was several miles down the road and next to a fellow who has a large articulated 4wd tractor, and I thought the field was one which was much better drained. I even went to that field and waited for 10 minutes before I called and found out which field it was.
I moved the tractor over and started. There was some seed on top but mostly it was making a nice slice through the ice and covering it pretty well. The 2wd 2-134 was not sinking in, nor was it really pulling hard. There was a slight draw next to the road and I stopped and walked it before going through it. I made it to the end of the row and lifted the drill and turned around. It did not pull down, sink, or act like it was soft in anyway.
The field is a twice disked prennial ryegrass field and there are large chunks of sod on the surface. The Great Plains drill slices right through them. They are fairly well frozen but they shatter when sliced and the harrow is doing a good job of covering the seed.
I head back up the draw and the tractor starts pulling down. I hit the differential lock and the throttle and the three-speed and lift the drill just a bit, but it doesn't matter. I'm stuck.
I almost said a bad word but the utter hopelessness of the situation made it pointless.
Tomorrow is Thanksgiving. Who will pull me out?
I checked the weather once again. I've been checking it every five minutes all day long. They have been saying it will be in the teens tonight and tomorrow it will be below freezing till a warm front brings rain in the afternoon.
The forecast has changed. Tonight it will barely reach the high 20's and tomorrow it will be above freezing by noon.
I did find a neighbor with a 4wd who will pull me out in the morning. I could not find the required cable or heavy log chains after dark tonight.
I am half a mind to take the 2-155 over in the morning, if my brother makes it home tonight but with metal filings in the three-speed I suppose that could get expensive.
Perhaps I'll get up at 4 a.m. and see if the ground is frozen and I can just drive the drill out.
I didn't even try to get it out by myself. 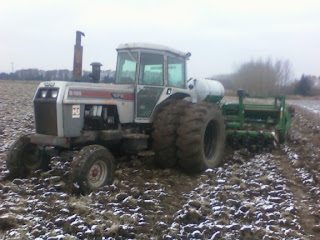 I should have just stayed home... But, It really doesn't look that bad does it?

This is what it looked like before I got stuck. 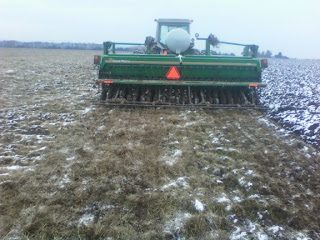 Posted by buddeshepherd at 6:53 PM