Why I don't answer the phone on Sunday

I generally do not answer my phone on Sunday.
There is a reason for this. A reason which sometimes must be reinforced.
You see, my daughter and wife feel that I could be a better person. I could be less grumpy and I should be happy and optimistic.
In fact, I got a lecture just this morning...
I was going to repeat my life philosophy of the positive attitude that is a result of my theory of diminished expectations, "if you expect the worst you are always pleasantly surprised as the worst never really happens-and if it does, why then you are prepared!"
So I am actually an optimist.
If I were an optometrist I would have more money, however.
But I chose not to argue. It was early in the morning. I had not had my oatmeal.
And so Sunday afternoon when the phone rang and I saw it was Scooter Boy I actually answered the phone.
His voice was weak and he was clearly in dire distress.
I briefly thought about pretending to be the answering machine but I thought there was a chance he  had been kidnapped by aliens. If he was in fact kidnapped by aliens, it would be an incredible story and I certainly didn't want to miss that one!
However, it was just that his pigs were out and in the neighbor's field.
Scooter Boy had gone after the pigs without his slicker and he was wet and cold and about to succumb to hypothermia.
He insisted that he needed me to bring my four-wheeler.
I suggested that he go to the house and warm up while I attempted to find an empty pickup and load the durn thing without ramps.
He explained that he had already called a friend who knew a guy who was on a tour from Hawaii who had a border collie that he used to herd or chase wild pigs and they were on their way.
I asked if he was sure he needed a four-wheeler and he said he was desperate for a four-wheeler and the pigs would head for the next county if he didn't stay with them but he was about to die from the cold and if he didn't get help soon he would die from the cold.
I said I'd come over.
I looked at the thermometer, after all, we were having a typhoon and not a blizzard...
It was on the positive side of sixty-five degrees but who knows, perhaps Scooter Boy was nekked...
It took me a while to load the four-wheeler. I had to use my wife's truck and I couldn't pop a wheelie to get the front end of the four-wheeler up on the tailgate because I'm not that good a wheelie-popper and I didn't want to scratch the truck. Finally I got the forklift.
When I got Scooter-Ville, Scooter Boy was just getting out of the hot-tub.
He was quite excited.
He was almost positive that should he have remained in the cold and wind for another five minutes his core body temperature would have dropped. "That hot tub saved my life," he said.
"Where are the pigs," said I.
The pigs were in the neighbor's field. I suggested we call the neighbor. Scooter Boy did not have the phone number and he said AT&T was not working but the guy from Hawaii had showed up along with the owner of a local art gallery and they had this dog that they used to run pigs in Hawaii and where are my boots and I need to get my boots and this dog is really good and....
"You want me to call, I have the phone number," I said.
"Well, he probably isn't home and I have to find my boots and I got really cold and I could have died but that hot tub saved my life and I can get you a beer when we are done and thanks for the four wheeler and I have to leave for Greece in three days, and..."
So I called. No answer. Well that problem was solved.
The next problem was getting his boots and getting through the gates and getting to the pigs.
I gave him a ride on the four wheeler.
He didn't want to hang on to me because he thought I might find that "gay." However, offering me a beer to get in the hot tub with him is something he does without a thought.
We were not naked on the four wheeler, there is a fundamental difference...
But, we made it down the hill and to the ditch separating his farm from the neighbor's. He said it was just a small ditch and he walked on across. Mentioning in passing that he could have died if from exposure but for that hot tub.
The ditch was bottomless mud. I did not make it across.
On the far side I saw a couple people in slickers who seemed to be amused and annoyed all at the same time. They waved at me. I found out later that they were the neighbor's daughter and her husband. I suspect much humor will be had in the neighborhood at my expense over this incident.
So I parked the four wheeler and pulled my slicker hood up. I could hear the dog. It didn't seem to be making much progress.
It was a little chilly. I really wished that I would have found the pants to go with my slicker. Not that I was pants-less. Just that my insulated pants were now wet. Hypothermia did not set in. However, mild annoyance did start to affect my happiness.
Eventually the pigs started to emerge from the woods.
The art gallery dude and his young friend from Hawaii soon followed.
Scooter boy was running around, getting in front of the pigs and fixing fences. His horses also showed up. They were quite friendly. 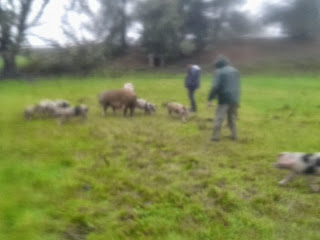 Hawaii boy held up a mushroom and expressed great happiness! Everything started to make a lot more sense... Ah, hippies! I had almost forgotten exactly who I was dealing with. Why should I expect rational thought or good herdsmanship? I decided to simply revel in the randomness of the event. This made me much happier and I took a photo.
The dog was not Collieguy's dog.
The dog also embraced randomness. This did keep the pigs sort of bunched up but didn't really move them in any particular direction.
We did get them up to the barn where it was discovered that the fence was in shambles.
I was going to ask Scooter Boy if he had in fact disconnected the electric fence but then I though better of that idea.
I was very much entertained when he picked up the downed wire and it shocked the crap out of him.
Then I went and unplugged the fence.
Hawaii Five-O exclaimed that we are all shooting sparks. I didn't understand that statement at first, thinking it was reference to the electric fence, then I realized... shrooms! Oh yeah, nothing like a fresh shroom off of a cow turd to get you through rain storm.
So many things now made sense to me.
Mr. Art Gallery and Shroom-boy headed for the hot tub. I helped scooter boy fix the fence.
He offered me a beer and a soak in the tub.
I declined.
He did give me two dead chickens. They were plucked and shrink-wrapped.
He also mentioned that I possibly saved his life and that another five minutes in the cold would have killed him.
I noted that he was certainly lucky to be alive.
We loaded the four wheeler and I went home.
Shroom-boy was standing in the door way in his underwear holding a beer.
I went home and after warming up next to the new woodstove and having a cub of coffee and several slices of zucchini bread I went down the river and helped my brother pull the pump. He was almost done so that worked out pretty well also.

In other news, a friend of mine fell off his corn picker and broke his leg multiple times. This post is dedicated to him. Although I should note that the good painkillers make you constipated and laughing hurts like heck when you have stitches in your foot. That is why I wrote something not funny at all. At least if you were in the rain chasing pigs. Although seeing Scooter-Boy get shocked by the electric fence was quite entertaining.
Now I'm going to go and chop silage in the rain. I must remember to keep my core body temp up.

Posted by buddeshepherd at 8:10 AM