The MMG1355 is starting to take shape.
There are a couple problems.
1. I slid the main PTO shaft all the way forward and there is an inch of room between the spacer plug and the snap ring groove. In fact, you can push the spacer plug past the o-ring. I do not see how this is possible. Unless someone forgot to install the flywheel. (Weighs 150lbs, is big and round, don't see it sitting in a corner of the shop...)
2. During installation of the engine, someone let the engine down on the oil cooler lines and smooshed them all...
3. We installed the engine out of a 2-150 White a couple years ago. It has a different oil pump which does not have the hydraulic charge pump on the engine. So, we ran a line from the case drain on the hydraulic pump to the oil cooler. Now we are going back to the Moline/G1355 set up and I have to figure out how to change it back. I can't remember.
4. I modified the a/c to put the condenser in front of the radiator. It was too small. I need one the correct size. I'm to cheap to just order the right sized on from Harold Electric. 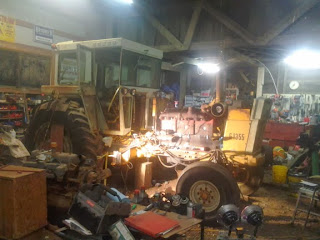 Here is a photo showing why our coffee tastes different than other people's coffee. 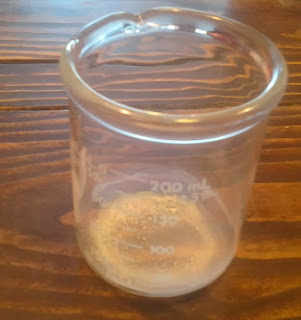 I put a beaker of water on the woodstove for a day. I think next time I will weigh it first. Wonder why the residue glows in the dark? I need a test kit...

Not getting off the farm much brings up another point. We are taking another epic and low budget vacation. I say "another" because we did it once before. A decade ago we took a 1970 Chevy 4wd and an equally ancient Aloha trailer and a three year old on a 6,000 mile ramble across the USA. We even camped in Collieguy's pasture!
This time we are flying to Florida. Not the tourist part of Florida. Nope, the Northern Panhandle, followed by a week on the Redneck Riviera, and perhaps a trip to Cape Canaveral to see MuddyValley's contribution to the space program.
Since we are limited on funding, it should be interesting. You all may not understand our vacations... Cheap... We were going to buy a $30 tent on Amazon and have it drop shipped but it is starting to look like it will be colder than expected. Might have to move up to one of those Yurts in the National Parks. The question is... do I take the MacBook and blog? Should I buy a cheaper book on ebay? A tablet?
The other question is... If we run out of money are are stranded at Mexico Beach is there anyone who knows where the Holiday Soup kitchens are? A list of charities? Youth Hostels?

Also...
I am trying to figure out a present for someone obsessed with craft brewing. I was going to get him 50lbs of malted barley and a bag of hops. That is not working at planned. Could get him a ton easier than 50lbs.
I tried this link for advice. This is a totally pathetic list of gift suggestions. I could write this crap and it would at least be funny...
Perhaps I'll just buy him this  on amazon about 20 times Click-There Stands the Glass. Or a Legendary Stardust Cowboy collection, No, don't want to get him on the Hard Stuff...
Posted by buddeshepherd at 8:04 AM