I just remembered that I've left my tractor and drill in a field somewhere...

This morning my lovely and gracious wife took a break from making pancakes to point out that I had neglected to put plastic over the dirt pile I left in the front yard. Also, that it was my obsession to get plastic and put over the dirt pile, and that after getting the plastic, I then let the dirt pile set in the rain.
I pointed out that I had covered one dirt pile but got distracted and didn't get the second one covered.
She gave me a funny look...
And then I remembered! I went off and left my tractor and drill in a field somewhere. It should not be hind to find them as I only planted 100 acres this fall. (Not that I will ever get around to sending out bills.)
Here it is, next to the old barn with the recessed door hangers. 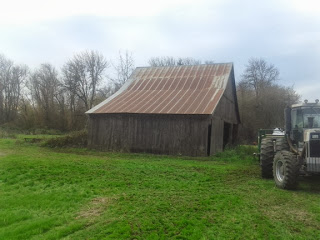 I also found this harrow that was built by my father and uncle, back in the day... when real farmers didn't wear short pants... 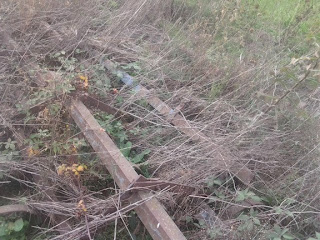 Now, instead of going to work, we are going to watch season one of Dr. Who. This will reinforce our families' belief in the mythology of the UK as seen though reruns on OPB! (And faint memories of being there in 1984)
However, we now have a 42" LCD TV (gifted from the Father in Law) and unlimited internet TV on our rather old Wii, due to our new Onlinemac antenna and someone subscribing to Amazon Prime.
Last night I stayed up late watching episodes of Angry Beavers. I wanted to watch South Park but it would have cost $1.99 which I deemed as too expensive.
Have a nice day...
Or perhaps a better Eastwood quote:
"Get off my lawn!"
Posted by buddeshepherd at 8:12 AM